While all eyes of electric vehicle advocates and potential future owners are on Washington, D.C. and the fate of the Federal EV tax credit, the race to see whether GM Or Tesla will reach the 200,000 phase-out threshold marches on.

Through October 2017 (using sales numbers from Inside EVs), General Motors remains closest to the 200,000 mark having sold 158,257 EVs since 2010, followed by Tesla with 148,156 (Tesla does not break out sales by geographic market, so these numbers are estimates from InsideEVs). Nissan and Ford are the only other manufacturers with more than 100,000 sales of EVs in the US. 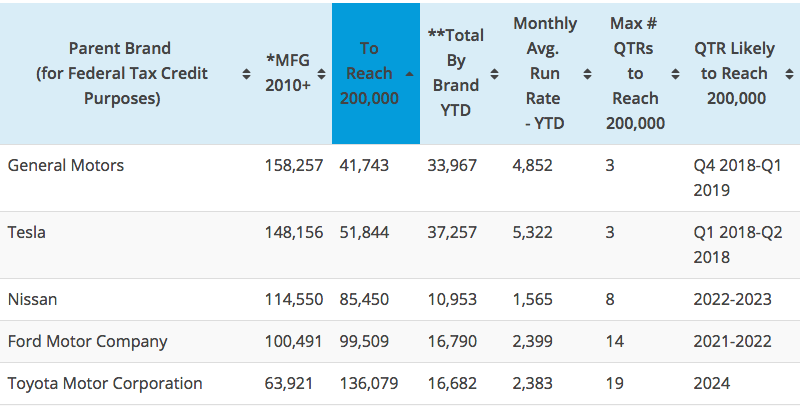 At current sales run rates, GM should reach 200,000 sales in about 9-10 months or July-August 2018. Sales of the Chevrolet Bolt continue to climb each month, while the Volt on the other hand is seeing a gradual decline. The Volt’s decline is likely due to many EV buyers choosing the Bolt or Toyota Prius Prime instead of the Volt.

Projecting when Tesla will reach the 200,000 mark is a bit more difficult because: A) Tesla does not break out sales by geographic market, so sales numbers for the US are only estimates; B) The Model 3 “production hell” and unpredictability of how many might be delivered in the coming months; and C) Both the S and X tend to see sales spikes at the end of quarters. At the current average monthly sales run rate of the combined S, X and 3, Tesla would reach the 200,000 mark also in about 9-10 months, or July-August 2018.

Tesla, however, could reach 200,000 in US sales by May 2018 if we assume an average run rate of 5,000 Models S and X and Tesla is able to start delivering about 5,000 Model 3’s per month by the end of Q1 2018. This projection could vary by a few months in either direction depending primarily on Tesla’s ability to scale the Model 3.

As a reminder, the federal tax credit is phased out over time beginning the second quarter AFTER the quarter in which a manufacturer reaches a total of 200,000 BEV or PHEV vehicles sold since 2010. Here is how the phase out works:

The following scenarios provide a useful model for the phase out period of the tax credit. As you can see from the chart below, the full tax credit amount of $7,500 will most likely still be available at least until the end of Q3 or Q4 2018 for buyers of the Tesla Models S, 3 and X and Chevrolet Bolt and Volt.

If you are a US citizen and are a current reservation holder for a Model 3, there is a good chance that the full $7,500 credit will still be available for your purchase through September 31, or possibly even December 31, 2018. 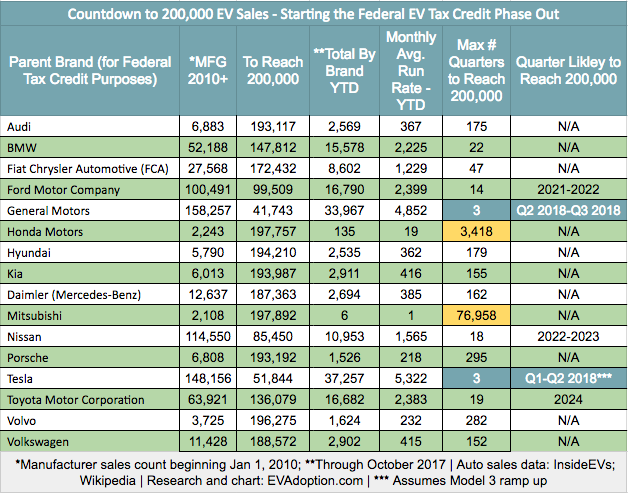 Of course the threat of losing the Federal tax credit could increase sales for many brands in November and December, or beyond if the end of the credit is extended by Congress into say mid-year 2018. Or if as is outlined in the House of Representatives version of the tax plan, the credit is eliminated on December 31, 2017 – than all of these projections are just an exercise in math.