But should the tax credit’s future be viewed as a just binary question of “Kill it or save it?”

The tax credit seemingly has as many supporters as it does those that view it as just another example of the government choosing winners and losers. The EV tax credit is also an easy target in the current political environment where many conservatives view it as a symbol of the beliefs of tree-hugging, upper-income, blue-state liberals driving expensive Teslas.

Many EV advocates on the other hand view the threat of eliminating the tax credit as an attack on EVs, that it would cause a potential significant decline in EV sales, the loss of many jobs and a decline in US auto industry competitiveness.

“That will stop any electric vehicle market in the U.S., apart from sales of the highly expensive Tesla Model S,” said Xavier Mosquet, senior partner at consultant Boston Consulting Group, who authored a study on the growth of battery powered vehicles. “There’s no Tesla 3, no Bolt, no Leaf in a market without incentives.” (Source: Automotive News)

(Editor’s Note: In my article ‘Edmunds: “Elimination of federal tax credits likely to kill U.S. EV market” (wrong)’, I explain why I don’t believe the loss of the EV tax credit would be catastrophic to EV sales in the US.)

If EV advocates want to save the tax credit, a key could be to change the GOP narrative and reduce or eliminate the easy targets of the credit. In fact, EV advocates could use this threat as a means to turn the current political environment in Washington, D.C. into an advantage and revise the plan to appeal to members of both political parties.

Following are seven potential changes that could sway opponents of the tax credit, while also keeping EV advocates from reaching for the panic button.

1. Set a minimum threshold percentage of a vehicle being made in the US. Require that a vehicle must either be assembled in the US or that 50% (or similar appropriate percentage) of its parts are manufactured in the US.

Why/Benefits: Some of the goals of an alternative fuel tax credit should be to spur job growth and increase competitiveness and innovation from US-based automakers.

Several foreign automakers including Hyundai, Kia, Nissan, Honda, Toyota, BMW and Volkswagen have set up manufacturing plants in the United States. In August Toyota and Mazda announced a joint venture to jointly develop electric vehicles and build a $1.6 billion plant in the US. While a US manufacturing-centric component to the tax credit likely wouldn’t have an immediate impact, it could encourage foreign automakers to build EV models in existing US factories and increase American jobs.

A manufacturing percentage threshold could also encourage US automakers to set up battery pack and drivetrain factories in the US rather than relying on them being produced overseas. The challenge with this of course is that it can take 3-4 years for such a factory to be up and running and producing at scale. This would mean that these factories might only produce a benefit for domestic automakers for the final few years of a revised tax credit.

Anything that encourages American auto companies to invest and innovate more quickly in EVs and other alternative fuel technologies helps to ensure they remain competitive in the coming decades.

2. Cap the vehicle purchase price. The EV tax credit could have a cap based on the average or median sales price of light vehicles plus the $7,500 or revised $5,000 suggested in #5 below. According to Kelley Blue Book, the estimated average transaction price (ATP) for light vehicles in the United States was $34,968 in January 2017.

Why/Benefit: Imposing a cap would help minimize the view by opponents of the credit that it is just for wealthy buyers of Teslas and other higher-end EVs.

3. Cap Adjusted Gross Income (AGI). Put a cap on adjusted gross income (AGI) at some appropriate level. For comparison, California has implemented income thresholds for its clean vehicle rebate program of $150,000 for single filers, $204,000 for head-of-household filers and $300,000 for joint filers.

Why/Benefit: Adding an income cap reduces or eliminates one of the key attacks on the credit, that it mostly benefits the rich.

4. Make the credit for any vehicle type that meets a specific fuel efficiency threshold. Expand the tax credit to apply to any vehicle propulsion type (gas, diesel, hybrid, fuel cell, BEV or PHEV) that is able to achieve a certain level of gas mileage or gas mileage equivalency. The current tax credit applies only to pure battery electric vehicles (BEVs) and plug-in hybrids (PHEVs).

Minimum thresholds could be for example:

Why/Benefit: Expanding the credit to all propulsion types, reduces the “picking winners” view among many politicians, increases consumer choice and encourages all types of innovation. The reality of course is that most auto manufacturers have recognized that battery-powered electric vehicles are the future, but this change provides the same tax credit benefit to fuel-cell, hybrids and advanced ICE innovations.

5. Lower the credit to $5,000 across the board. Lower the top credit amount of $7,500 to $5,000 and eliminate the multiple levels of credit amounts that begin at $2,500 based on the capacity of the battery. The single $5,000 credit would apply equally to any vehicle that met a minimum MPG or equivalency threshold as outlined in #4 above. 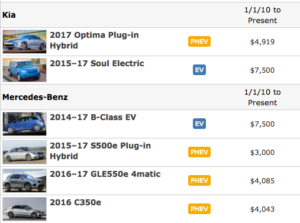 Why/Benefit: Lowering the top credit amount from $7,500 to $5,000 reflects the market reality that the cost disparity is getting smaller between alternative fuel vehicles and comparable internal combustion engine powered vehicles. Secondly, the credit has been available for nearly 8 years and it makes economic sense for a slight reduction in the credit amount. Thirdly, it puts all vehicle types on a level playing field and eliminates another complaint about the government choosing and favoring specific types of vehicle propulsion.

A revised tax credit could be reduced each year by $1,000 untill it reaches zero. A $1,000 step down each year could roughly parallel the annual decline in vehicle costs that results from technology advances and scaling manufacturing production. A declining tax credit might look like this:

Why/Benefit: Revising the expiration to an overall phase out in the credit amount motivates interested consumers to purchase sooner because of the higher credit amounts. It also puts all manufacturers back on a level playing field.

Under the current tax credit rules, the first manufacturers to reach the 200,000 EV sales milestone will most likely be Tesla, General Motors, Ford and Nissan. This means that in the next few years, mostly non-US automakers would have a significant competitive price advantage over domestic-brand electric vehicles. 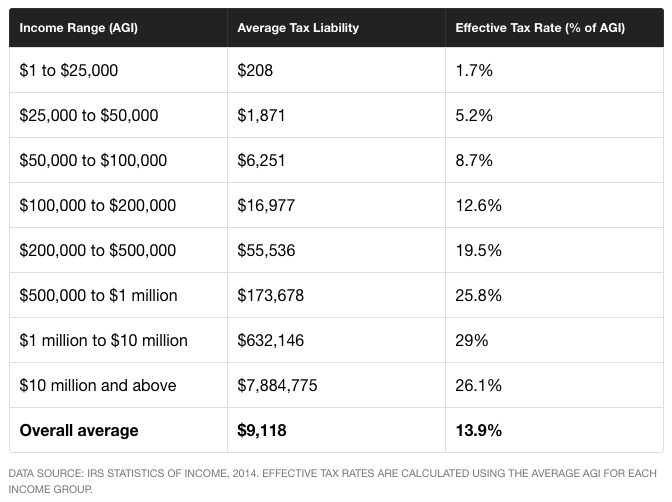 According to analysis from MotleyFool, 35% of US taxpayers had “no taxable income whatsoever or had taxable income, but didn’t end up owing any income tax due to credits, deductions, and other adjustments.”

Secondly, the tax credit is only available if a taxpayer purchases the vehicle via a loan or cash. If a buyer chooses to lease their EV (roughly 75% of EVs are leased according to Edmunds) the tax credit goes to the lessor who typically then passes on the value of the tax credit in the form of lower monthly lease payments.

An alternative, more transparent, direct and equitable approach than the current rules might be to allow taxpayers choosing to lease to deduct the corresponding amount of the deduction over the number of years the term of the lease.

Let me know in the comments what you think of these suggested changes to the Federal EV tax and if you have ideas for additional changes.

Additional Articles and Resources on the Tax Credits: