It is difficult to point to a specific moment in 2017, but a significant milestone occurred.

This is when the discussion around electric vehicles as the future of how cars and trucks would be powered, went from a question of “If?” to “When?”

As recent as late 2016 and into early 2017, the auto industry was having heated debates about whether, for example, fuel cell vehicles provided a better future than battery electric vehicles. Several auto industry executives also still declared their disdain for electric cars.

The usual arguments against electric vehicles (EVs) – their battery range is too short, they take too long to charge, there aren’t enough chargers, they are still too expensive and other issues – were still being cited in almost every article on EV adoption and interviews with auto executives. (Note: These are all legitimate concerns, however it has become clear that we are on a path to fix all or most of these shortcomings of EVs within the next 5-7 years.)

But beginning at the Consumer Electronics (CES) show in Las Vegas in January 2017, several auto companies started announcing significant electrification plans. Granted, many of these announcements included the production of regular hybrids, the electric vehicles were often 5 years (or more) away and frequently there were few specifics about the vehicles, leading to perceptions of “EV washing.” But the future EV announcements keep coming, and often even from previously highly skeptical automakers.

The buzz around the launch of the Tesla Model 3 certainly added to the EV turning point. And the sheer number of electric vehicles that have been announced or rumored in the next five years shows the magnitude of the transition away from vehicles powered by gas and diesel engines. My own analysis of new EVs expected to be launched in the US suggests around 65 models (and climbing almost weekly) will reach dealers between now and 2022. This would mean that by then end of 2022, roughly 100 BEVs and PHEVs would be available to purchase in the US.

The governments of China and India have also announced plans to move aggressively toward vehicle electrification in the next 10-15 years. And France and the UK declared they will ban internal combustion engines by 2040. In August 2017 German Chancellor Angela Merkel suggested that a ban on the internal combustion engine was on the way, but did not set a timeline. And, Continental, a major supplier for automakers around the world, came out with a bold prediction: internal-combustion engine development by German automakers will essentially end by the year 2025. 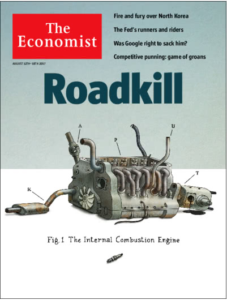 And perhaps the most direct and declarative signal point – and the thing that brought the biggest smile to my face – was The Economist’s August 12 cover article and imagery declaring the end of the internal combustion engine.

Now with EVs only at a bit above 1% of new vehicle sales in the US and in all but a few countries (and markets like California) around the world, clearly a lot of people still haven’t bought in. But this is primarily a supply and not a demand issue. There have been almost no EVs produced to date that meet the needs and budgets of most consumers.

But in the next 5-7 years nearly all new electric vehicles will have a battery range of at least 250 miles (or more) – which most observers consider the minimum range requirement to achieve mass adoption. Electric vehicles are also expected to reach cost parity in the same time frame and fast-charging should be widespread along with 80% charging times of around 15 minutes.

Because the average range of EVs will reach 250 miles or more, ‘range anxiety’ will be replaced by ‘charger anxiety’. Most charging, however, will be done at home and at destination or fast-charging locations. The biggest challenge will be providing convenient and affordable charging for low-income communities and to residents of multifamily housing or homes without garages. But as these user types will generally be the last to adopt electric cars, the marketplace will rise to the occasion and solve this problem in time.

We have a long way to go until electric vehicles reach mass adoption – around 2024 in the US by my forecast – but the auto industry is clearly beginning the shift away from gas and diesel engines.

In my next post I will pose a few dozen questions that now must be discussed and addressed as the world “officially” begins the transition to electric vehicles.