Since 2011 through projected model upgrades for 2019, automakers will have increased the battery range of their BEV models an average of 38 miles each upgrade – a cumulative 15% increase on average per year. These are two key findings from new EVAdoption analysis.

With battery prices continuing to decline at a steady rate I wanted to understand how auto manufacturers are translating these battery advancements into their upgrade frequency and mile range increases in their BEV models.

First, as background, across the 14 unique BEVs currently available in the US, the mean range is 190 miles and median is 151 miles.

To better understand past and predict future range increases with current battery technologies I took a look at six BEVs that have been available in the US for several years and most importantly for which the model had at least one increase in battery range. Since several OEMs have announced battery pack updates for 2019 model years I’ve also included planned upgrades for the BMW i3, Kia Soul EV and Nissan LEAF (an optional upgrade for 2019).

Note: I did not include the Tesla Model X since it uses the same battery packs as the Model S, although there are small differences in range between the two models. I also did not include the Fiat 500e, smart ED and Chevrolet Bolt because they have not yet had a battery upgrade. 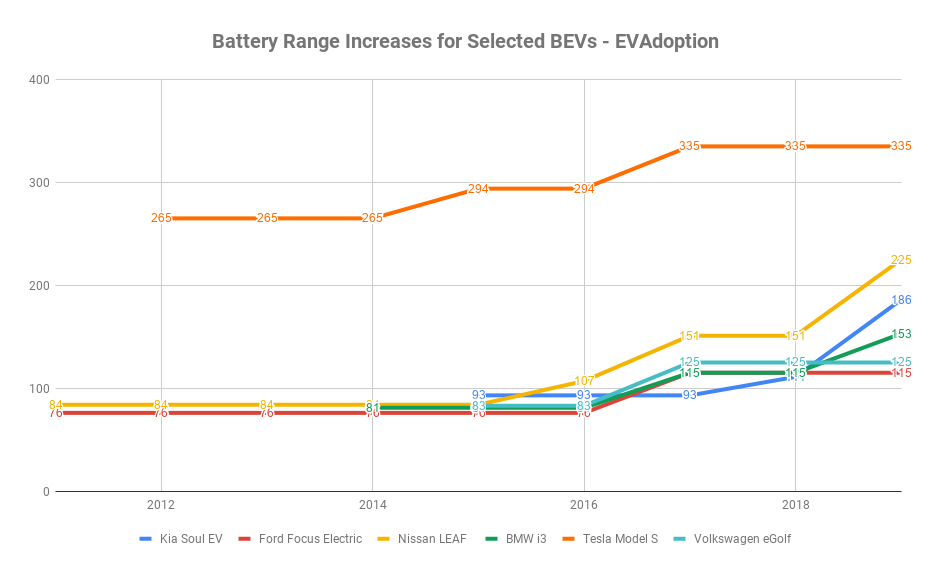 Ford didn’t increase the battery size of the Focus Electric for 6 years, whereas VW increased the range of the eGolf after two years on the US market. Nissan by comparison stuck with the 84 mile range battery pack for 5 years with the LEAF, but then increased the range each of the next 2 years. And it plans another upgrade option some time in 2019.

Over the course of existence of these 6 BEVs, the total range increased a low of 26% for the Tesla Model S to a high of 168% for the LEAF – if you include next year’s expected 225 mile option. If you only include the increase to the current 151 miles from 84, the improvement for the LEAF would still be an impressive 80%.

Other than the i3, LEAF and Kia Soul, none of the other BEVs are expect to have increased range in 2019. Though Tesla could of course increase the range on the Model S (and X) in 2019, there are currently no rumors to that effect. (Note: Although BMW has announced availability of their increased range on the i3 for November 2018, I’m counting this in the 2019 model year.)

During the period of 2015 through what is anticipated for 2019, all 6 BEVs will have had at least one battery pack upgrade. The Tesla Model S and Nissan LEAF will have 3 upgrades (if you include the 2019 optional upgrade for the LEAF) and the BMW i3, and Kia Soul will have 2 upgrades. The Focus and eGolf have had only 1 increase in range.

As battery production scales to match growing demand along with greater investment in battery technology and manufacturing efficiencies, we will likely continue to see OEMs regularly update BEV battery range (frequently with no price increase) every 2-3 years. While range increases will vary by OEM, model, price point and the level of existing battery range, we will likely see average range increases for a majority of BEVs of  25 to 40 miles every two to three years for the next several years.

While range increases will vary by OEM, model, price point and the level of existing battery range, we will likely see average range increases of 25 to 40 miles every two to three years for the next several years.

If we assume the fleet of available BEVs average 275 miles of range in 2022, then the combined BEV fleet average (without any significant advances in battery technology) could reach about 400 miles by or well before 2030. And if solid-state batteries reach market as expected around 2025-2027, higher-end BEVs could surpass 450-500 miles by 2030. 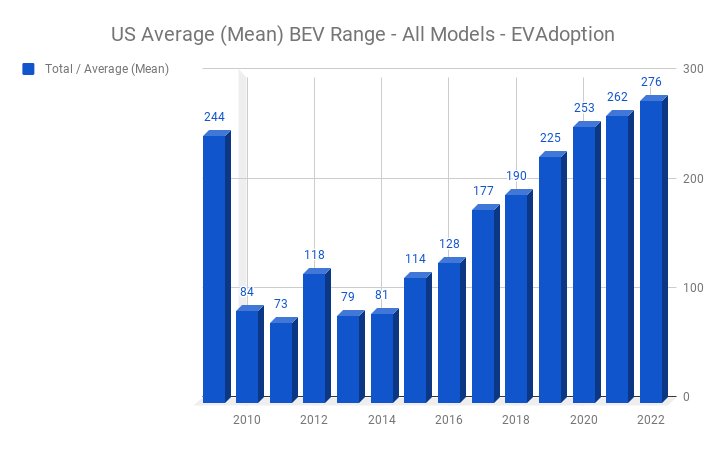 Implications: Lower Residual Values and a Possible Shift to the Subscription Model

This is obviously great news for consumers who will be able to purchase both new and used EVs with increasingly longer ranges – and at lower price points. This increase in range every few years could also drive 3 trends: 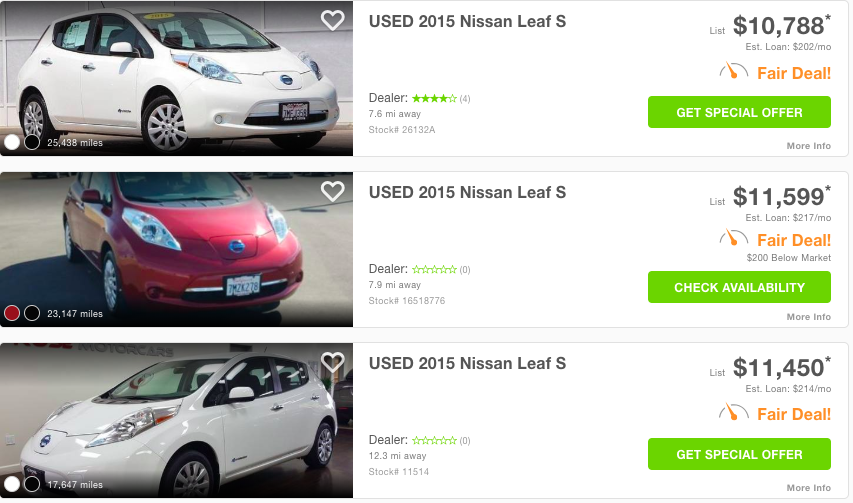 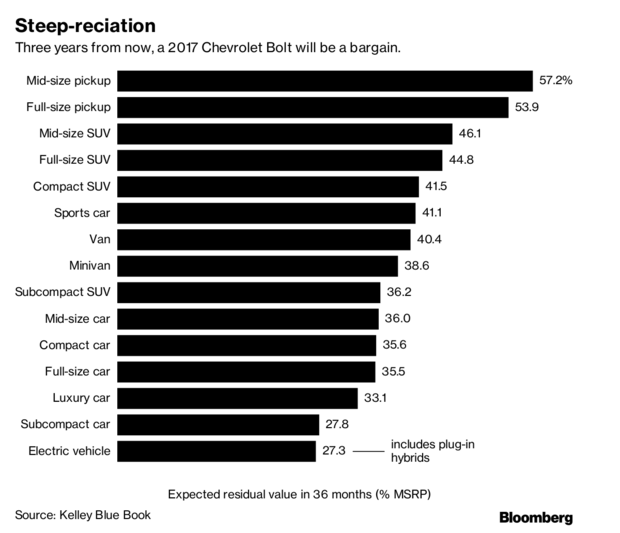 In the above chart from Bloomberg using data from Kelley Blue Book, electric cars have the lowest expected residual value after 36 months across all types of passenger vehicles in the US.

While these are averages and there are many variables that go into the value of a used EV, I assume that at least for the near future, EVs, especially those with below average battery range, are likely to depreciate at higher rates than most ICE vehicles and EVs with longer ranges.

Shift to Leasing and Subscription Models: In the US, approximately 70% of all new vehicles are purchased versus 30% being leased. However, 80% (according to Bloomberg New Energy Finance) of all BEVs (except Tesla which does not disclose lease versus buy numbers) are currently leased. A reason is because buyers know that in 2-3 years a potentially significantly better BEV will be available for the same or less cost.

Similar to trading up for a new smartphone (as I pointed out in Technology Obsolescence: The Auto Industry’s Lurking Challenge), many consumers will increasingly want to upgrade to the latest EV with longer range, better software, faster charging capabilities, more advanced autopilot technology, and other features and bundled services. By upgrading every 2-4 years, consumers will look to shift the car value risk to the auto finance companies, while paying for the benefit of increased flexibility and the latest and greatest features.

This is one (among several) reasons we may see a significant shift to the subscription model for cars instead of buying or leasing – especially among the luxury car makers whose customers can more easily afford the premium cost of this approach.

Increase in the Used Car Purchase Rate: Because of fewer things needing to be repaired and hence lower maintenance costs for EVs, there is a likelihood in the next 5-7 years of a sizable increase in the percentage of used versus new vehicles being purchased. The shift to leasing also means there will be more frequent turnover of cars and value-oriented buyers will be able to buy used EVs at significant discounts.

As EVs are adopted by mainstream consumers, reach price parity with ICE vehicles and typical range surpasses 300 miles, used EVs should hold their value better. The exception to this will be when EVs begin using solid-state battery technology and see significant increases in battery range overnight.

At the same time there will be an inflection point when vehicles powered by internal combustion engines become viewed like a standard cell phone versus multi-function smartphone. When this happens sales and the value of ICE vehicles will decline significantly and EVs will hold their value better.

The next 10 years will likely be the most disruptive and transformative of the last 100 years for the auto industry. Hold on, it is going to be a wild ride.