While less critical than the other mistakes, I believe GM made two potential brand errors.

I love the name “Bolt.” I also love the name “Volt.” But as an EV advocate I know in my sleep the difference between the two models as well as BEVs and PHEVs. The average car buyer does not.

While I don’t believe any research on this naming confusion exists, my own informal conversations with a friend who owns a Bolt and non-EV expert friends revealed that many people don’t know the difference between the Volt and Bolt, let alone what the difference is between a “PHEV” and BEV.

To understand this better, I conducted a small survey of 67 US consumers on social media, which while not statistically valid, nonetheless confirmed for me the confusion I was 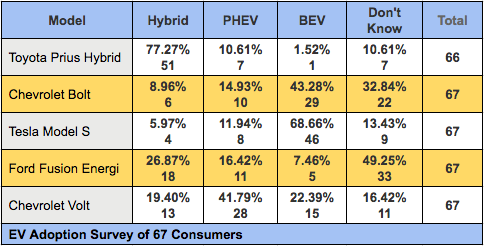 The Google search engine seems to be a bit confused. For several searches I’ve conducted involving the Chevrolet Bolt, the organic search results often mix in links for the Volt. The second organic result for a search on “Chevrolet Bolt” in fact is for Volt (good for Chevrolet, but confusing for searchers.)

In response to my question about the potential confusion, GM responded: “There is an instant familial recognition with the two names and with the reputation for quality and durability Volt has earned, Bolt EV honors that in both name and service.”

Secondly it’s a Chevrolet. During the 1920s GM CEO Alfred Sloan was attributed with the aphorism “a car for every purse and purpose” that described GM’s integrated, multi-brand marketing strategy. Each of the GM brand’s products was to be focused on one segment, with Chevrolet at the low end of the market and Cadillac at the high end.

While GM’s portfolio of auto brands has been slimmed down over the last two decades, Chevrolet is still the entry-level brand and Cadillac the luxury division. So why did GM choose to launch its supposed world-beating 238-mile range, $40,000 EV under the low-end Chevrolet brand?

With EV sales hovering just under 1 percent in the US and now at 4.8 percent in California, American EV buyers are still comprised of “Innovators” and “Early Adopters.” These buyers are characterized by wanting the latest and coolest technologies and/or products that make a statement or achieve some higher purpose. Or, as we saw with the Nissan LEAF in Georgia a few years ago, they will exchange shortcomings (e.g., short range) if the price is right.

An electric Chevrolet Bolt, even a really good one, at this stage of the market is simply not going to excite most early adopters. Both the Volt and the Bolt are indeed succeeding at attracting buyers who would never have considered purchasing at Chevrolet. And that is a good thing for the brand.

GM’s response to my question about “Why launch the Bolt as a Chevrolet?”: “The Bolt EV breaks the affordability barrier for a long-range EV and delivers on our promise to make electrification an available option to a wider group of buyers.”

That is a novel goal, but isn’t a smart strategy when we are still so early in the adoption of EVs. In 3-5 years, this strategy would make much more sense. But timing is critical.

So you must ask: Is the Bolt sold under the Chevrolet marque the best strategy to maximize sales of the Bolt, or simply the most convenient GM brand to attach the Bolt to and help energize the brand? Is the Bolt’s job to energize green EV buyers like the Corvette attracts sports car enthusiasts?

Fixes: The brand issues are potentially complex and costly, so I understand why the Bolt is a Chevrolet. But the folks in suits in Detroit could have considered a few different options: