5 Months of Chevrolet Bolt Sales: What Do The Numbers Tell Us So Far?

The Chevrolet Bolt is an impressive car and in several ways a breakthrough electric vehicle (EV). So why aren’t Bolts flying off dealer lots and shattering EV sales records as many industry observers had expected?

After the first 4 months of 2017, the Chevrolet Bolt has climbed into 5th place in total US BEV/PHEV sales, and sits about 3,000 units behind its sister PHEV model, the Chevrolet Volt. More significantly, however, in April the Bolt was only about 500 units behind the Volt versus about 1,150 for March.

After sales in February and March dropped below that of January, Bolt numbers jumped back up to 1,292, its highest sales month since initial launch in December of 2016. Another positive trend from April is that Bolt sales increased over March, whereas top competitors such as the Volt, Nissan LEAF and Toyota Prius Prime (plug-in hybrid) dropped below their March unit sales. 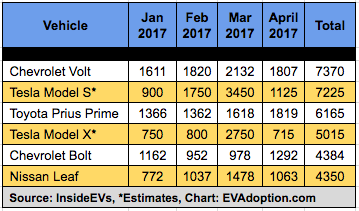 Depending on your perspective, this start of sales after 5 months is either on target, exceeding expectations or a bit disappointing for the highly-anticipated and multiple car of the year award-winning Bolt.

I asked (before April numbers were announced) GM spokesperson Fred Ligouri if Bolt sales “Are meeting expectations?”: “Yes, much like the Chevrolet Volt, the Bolt EV is attracting new buyers to Chevrolet showrooms and introducing the benefits of living electric to an even larger audience of drivers. Bolt EV is currently available at dealers in eight states and will be available nationwide by late summer.” He added that the Bolt is also meeting sales expectations in the important state of California.

While the April numbers are very encouraging, I fall into the camp of expecting and hoping for better initial sales for the Bolt.

In fairness to GM and the Bolt’s initial sales, the 238-mile range BEV (battery-electric vehicle) has only been on the market a few months and isn’t available in all 50 states. (A friend of mine who lives in Massachusetts and recently purchased a Bolt said it was actually difficult to find one.) The marketing and advertising likely hasn’t kicked in yet, meaning a lot of consumers aren’t yet aware of it. If we give the Bolt more time in the market, sales should start climbing dramatically.

Further, auto industry sales overall declined in April, including nearly 3% at GM, so the rise in sales of the Bolt was a positive in light of negative car sales. Declining car sales is trend that is also expected by most industry analysts for the next few years.

The Bolt was only available in 2 states in December 2016, 5 states in the month of February, 7 in March and 8 in April. So geographic availability is still limited, however the 8 states the Bolt was available in by April comprised 75.5% of all BEV/PHEV vehicle sales from January 2016 to January 2017.

So in theory, those markets should contribute roughly three-fourths of all Bolt sales in the US. If we divide the Bolt’s 4-month sales in 2017 of 4,384 by 0.755 we could expect that the Bolt’s sales would have been around 5,807 units. That would in theory put the Bolt in fourth place behind the Chevrolet Volt, Tesla Model S and Toyota Prius Prime. That would also bump April sales to an estimated 1,711 units and put the Bolt within about 100 units of the Volt and Prius Prime.

That changes the sales picture a bit. As 2017 rolls on and people become more familiar with the Bolt, EVs in general, and Chevrolet markets it more aggressively – including offering bigger incentives and aggressive lease rates – I would expect the Bolt to become the number one selling BEV/PHEV in America.

Let’s guesstimate that by Q3 of 2017 when the Bolt is available in all 50 states, that it achieves an average monthly sales run rate of about 4,000 units. That would put it on pace in 2018 for close to 50,000 in sales and the most ever for annual sales of an EV. Hurray!

That rosy prediction of course doesn’t factor in the impact of new competitive models such as the Hyundai Ioniq Electric, an updated Nissan LEAF with longer range and of course most significantly the launch of the Tesla Model 3. Assuming Tesla actually achieves its production forecasts for the Model 3 in 2017, the Bolt would then be relegated to second place in monthly sales.

Another wild card is the growing number of Nissan LEAFs, Fiat 500e’s (in compliance states) and BMW i3s that are coming off of 2-year leases and sold at significant discounts. While they all lack the range of the Bolt, EV bargain hunters may opt for one of these options to use as a commuter or around town car at a cost of 25%-50% of a new Bolt.

But in spite of these initial solid numbers, I consider the current and future run rate to be disappointing and less than what they COULD be for the Bolt.

GM’s biggest challenge with the Bolt of course is that it is living in the shadow of excitement about a car not yet on the market, the Tesla Model 3. The Bolt and Model 3 will both have similar ranges in the low 200s and cost, before incentives, of around $35,000-$40,000 (higher for upgraded Model 3s).

But let’s be honest. Tesla has quickly become an aspirational brand, akin to Apple. We are still in the very early adopter stages of EVs and buyers are either looking for a practical alternative to a gas-powered car, or they want to make a statement with their purchase. The Bolt does not do exceptionally well in either of those categories of buyers.

As much as GM should be applauded for a break though EV with the Bolt, I believe they have at the same time missed the mark with a few different strategic decisions and could and should have easily achieved double the current sales pace. And I believe with the right moves, the Bolt could have become the “new Prius” and achieve 100,000 unit sales in 2018.

In upcoming posts, I will outline several factors that I believe have contributed to the Bolt getting off to a decent, but not stellar sales start and where GM executives dropped the ball and made several key and strategic mistakes. Here are the posts (so far):