When will the US Federal electric vehicle (EV) tax credit begin to phase out for a specific manufacturer?

This is a question that many consumers, analysts, electric vehicle advocates, lawmakers and others (including EV haters) are all curious about. They wonder when the tax credit amount is reduced during the phase out period, or ends completely for specific automakers, will it impact EV sales? (How does the tax credit work?)

We won’t know of course until the credit phase out actually begins for some manufacturers, such as Tesla in late 2018/early 2019 and General Motors in 2019.

In our table (below), we’ve calculated an estimated maximum number of quarters to reach 200,000 units for each automaker based on their current monthly EV sales run rate. These run rates will begin to change significantly in the next few years as brands such as Audi, BMW, Daimler (Mercedes-Benz), Porsche, Volvo and Volkswagen launch new EVs.

Recognizing that some automakers will soon see an increase in their sales run rate (e.g., Tesla), we’ve included an estimate of which quarter the automaker may reach the 200,000 unit threshold. As a reminder, the full tax credit remains during the quarter a manufacturer reaches 200,000 units sold, and for the subsequent two quarters. Then it begins the phase down for the next four quarters until it ends completely. 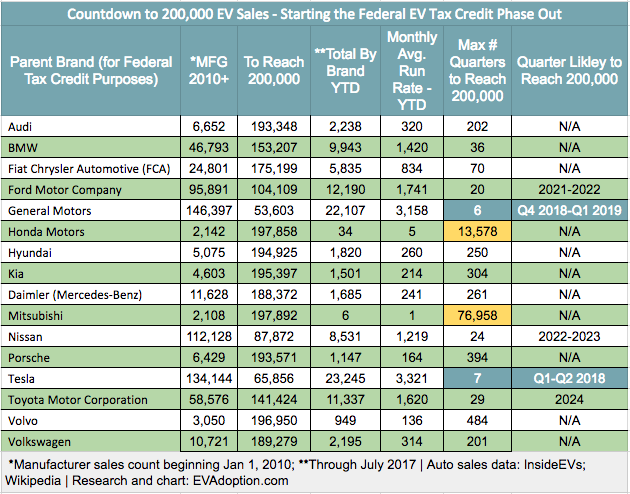 View a sortable version of this tax credit table

GM is currently closer than Tesla to the 200,000 threshold and only needs to sell fewer than 54,000 more units to start the phase out process. But, assuming Tesla is successful in scaling up production of the Model 3 during Elon Musk’s stated period of “manufacturing hell,” the EV maker should reach 200,000 units sold in the US before GM and in either Q1 or Q2 of 2018.

Our view at EV Adoption is that the credit phase out will have only a minor impact on the Tesla Model 3, S and X, but could hurt sales of GM’s Chevrolet Bolt and Nissan’s LEAF. Because most luxury cars – and especially EVs – are leased, the federal tax credit goes to the leasing company, which is then usually passed on in reduced monthly payments to the lessee.

But this monthly payment reduction may not be very transparent to the buyer and so it probably only affects buyers who did not understand how the credit worked. If a consumer, for example, thought that the price of their EV was reduced or received a rebate, then they may back out of a purchase due to tax credit confusion.

While anyone’s guess, I would estimate this “credit confusion” to at most perhaps turn away 5%-10% of potential EV buyers. The potential bigger impact could be on consumers looking to buy EVs priced in the $30,000-$40,000 range such as the Nissan LEAF or Chevrolet Bolt. Those potential buyers may have calculated that a $7,500 tax credit could in essence pay the monthly payments for roughly half of a 3-year lease.

However, attractive EVs with at least a 200-mile range are likely to not see much of an impact from what are in essence still early adopter buyers who have the financial means and are willing to pay a price premium over comparable cars powered by an internal combustion engine (ICE).

There are rumors that Ford is looking at eventually discontinuing the C-MAX (presumable both hybrid and PHEV versions) and hopefully the slow-selling Focus EV and their BEV SUV is not expected to arrive until 2020. So Ford’s run rate may increase little over the next few years. Nissan has an updated LEAF coming out later in 2017 and an entirely new version is expected to be available in a few years. But with the launch of the Tesla Model 3, Nissan may struggle to increase sales of the LEAF at any significant level.

On either a humorous or rather sad note, a few automakers have sold so few EVs to date, such as Honda and Mitsubishi, (not to mention Mazda, Jaguar and others that have sold zero) that it would be thousands of years before they would reach 200,000 EVs sold. This will obviously begin to change significantly in the coming years, but it does illustrate the wide chasm between some of the automakers.

While the media, Tesla stock shorters and EV haters or people who dislike the idea of EV tax credits on principle like to wave their arms around and predict that the sky will fall when the federal EV tax credit phases out for automakers – in the near term the phase out should only be of concern to Tesla and GM and their potential customers.

And beyond 2020 when Ford, Nissan, Toyota and BMW approach the phase out – we will be in a very different auto and EV market. By my forecast, around 2022 there will be roughly 100 EVs available in the US, most BEVs will have a range of 250-300 miles and will close to cost parity with comparable ICE cars. At that point the federal tax credit will be a nice to have for mainstream buyers, but not a must have.

Here you’l find the permanent location of the federal tax credit phase out tracker and links to several resources around the credit. Also, here is a quick link on how the tax credit works.