The survival of the Federal electric vehicle (EV) tax credit is a good thing for the auto industry and consumers, but several flaws in its design will give EV laggard automakers a significant competitive advantage beginning around 2020.

As background, the Federal EV tax credit phases out over 5 quarters beginning the quarter following the one in which a manufacturer sells 200,000 EVs in the US (see chart). The tax credit ranges from a high of $7,500 to a low of $2,500 based on the capacity of the battery pack.

The first flaw, or quirk if you prefer, in the design of the tax credit rules is that once the 200,000 threshold is reached, there are no limits on the number of vehicles sold that are eligible for the tax credit. So an EV manufacturer could take 5 years to reach 200,000 in US sales, and then sell as many EVs as they can make in the subsequent 5 quarters.

For example, if Tesla is actually able to scale up production and deliveries of the Model 3, they could sell 300,000 or more EVs AFTER reaching the 200K threshold that are eligible to qualify for the tax credit.

This is great for consumers, but it rewards those automakers who wait for the demand for EVs to get closer to mass adoption so they are able to sell as many EVs as they can make after the 200K threshold.

Based on current sales estimates, the tax credit will phase out completely for Tesla after Q3 2019, GM likely after Q4 2019 and Ford and Nissan in 2023. As other automakers launch new EVs and scale up production, their estimated time frame of simply reaching 200,000 in EV sales will shorten significantly, but many may not reach the 200K threshold until at least 2025 (or later).

This means that many automakers and their customers will still be able to take advantage of the tax credit well into 2027, when EVs are expected to have already reached cost parity with similar internal combustion engine (ICE) models.

While liberals, conservatives and libertarians can debate the logic and need for various tax credits, their usual intent is to spur investment in, and demand for, emerging technologies and industries. In the case of the EV tax credit its presumed purpose was to make electric vehicles more cost competitive/affordable to  consumers and to help drive mass adoption.

While there is no exact consensus, most forecasts put EVs at cost parity with their internal combustion counterparts between 2022 to 2025. As it stands now, the EV tax credit could be available for many years after EVs have become price competitive with – and even cheaper than – ICE models.

Some might argue that the credit would still make sense to further help reduce carbon emissions from the transportation sector, but it’s lack of an end date also hurts 3 American automakers in particular – GM, Tesla and Ford.

As the first companies to see the tax credit phase out (both likely in late 2019), GM and Tesla stand to be at a significant future sales disadvantage against competitors.

In 2020-2021 battery prices will have declined significantly (likely at least by 50%), the average range of most new EVs will be 250-300 miles, charging infrastructure will have expanded greatly and American consumers will have about 100 choices of PHEVs (plug-in hybrid EVs) and BEVs (battery-only EVs). So those automakers that didn’t invest in EVs early on and achieve strong sales – basically most everyone except GM, Tesla, Nissan and Ford – stand to benefit greatly.

Take an automaker such as Toyota and assume they reach the 200K threshold sometime in 2021 based on a consistent increase in annual growth rate of their only current EV, the Prius Prime PHEV. At that point EV sales in the US should be seeing strong growth and comprise perhaps 5% of new vehicle sales in the US and 15-20% in California.

Let’s speculate that Toyota launches PHEV and BEV versions of its new C-HR crossover in 2021. If Toyota could sell 20,000 combined units per month of the EV versions of the C-HR, they would be able to move 300,000 units that would qualify for the tax credit.

In 2021, let’s also speculate that GM launches a Buick crossover based on the Chevrolet Volt PHEV platform and has updated and improved its Bolt BEV. Both models receive great reviews by the auto trade press, have excellent word of mouth and are competing directly with the Toyota C-HR for mindshare and customers. 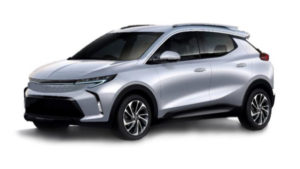 But here is the problem. Buyers of the Toyota C-HR EVs can still take advantage of the Federal tax credit (at whatever applicable level), giving Toyota dealers a significant sales competitive advantage versus similar EV models from GM brands.

That really hurts if you are companies such as Tesla, GM, Ford and Nisan that invested earlier than many competitors and benefited from the tax credit and were able to reduce the cost differences from ICE competitors – the point of the credit.

2-4 years from now, however, many of the electric vehicle laggard automakers will bring EVs to market that will benefit from a more developed market, higher levels of consumer adoption of EVs – and the availability of the tax credit. In essence, while these “late to the game” automakers took little to no risk and sat mostly on the sidelines for years relative to electric vehicles, in a few years they directly benefit from the early investment made by a few competitors.

Now, and not to bring geo-politics into this policy discussion, but beginning around 2020 we should start to see the entrance in the US of Chinese-made BEV crossovers. Assuming significant tariffs are not applied to Chinese vehicles imported into the US, these EVs will likely have an extra cost advantage due to the available tax credit.

While it will take Chinese brands at least 3-4 years to build brand acceptance and to see significant sales growth, they will still benefit greatly from several years of available tax credits. And assuming these EVs are already priced at or below models from GM, Ford and Tesla, for example, the Chinese brands would have a compelling advantage over domestic US models.

What, If Anything Should Be Done?

In my CleanTechnica article, 7 Potential Revisions to Federal EV Tax Credit, I suggested implementing a sliding tax credit dollar amount (starting at $5,000 for all EVs, and reduced $1,000 each year) until it reached zero dollars. This would put all automakers on an even playing field and the credit would expire for everyone at the same time.

Those manufacturers who invested early in EV development, along with their new customers, would be rewarded by the continued availability of the tax credit. Those automakers that waited until very late when demand had already begun to approach mass adoption to bring EVs to market would still benefit from the credit, but no longer have a competitive advantage.

While the EV tax credit barely registers as a blip on the policy radar screen among members of Congress, now that it has survived the threat of being eliminated, the tax credit should be redesigned to level the future playing field among automakers. As it stands today, the tax credit will eventually penalize those automakers – including 3 in the US (GM, Tesla and Ford) – that took the greatest risk early in the market for EVs.

What do you think? Should the tax credit be revised?