Remember a few short years ago when the hot debate was whether cars in the future would be predominantly powered by fuel-cells versus batteries? And even more fundamentally, if electric vehicles (EVs) would ever move beyond the niche “green” and luxury-performance buying market?

My how sentiment seems to have changed recently. Today, there is growing consensus that mass consumer adoption of EVs is now a question of “When?” rather than “If?”

On forums, social media and in the comments section on CleanTechnica, the current debates typically center around when EVs will “cross the chasm,” “reach the tipping point,” or “achieve mass adoption”? And while there is much nuance with each of those inflection point terms, the fundamental question centers on: “When will EVs move from niche to mass market sales?”

For this and future posts I will use the specific 16% target of new EV sales as a percent of total auto sales. The 16% milestone combines “Innovators” (2.5%) and “Early Adopters” (13.5%) from the widely accepted Everett Rogers Diffusion of innovations technology adoption curve and would propel EVs into the “Early Majority” and clear adoption by American mass consumers.

While auto industry experts don’t agree on the future forecast of new auto sales, using 17 million per year as a reasonable estimate going forward, U.S. consumers would need to purchase roughly 2.7 million BEVs and PHEVs to reach the 16 percent level. This equates to a level of sales 18 times greater than the roughly 150,000 EVs sold in 2016.

Wow. We have a long way to go.

But just how long? When will 1 in 6 new autos purchased in America be fueled partially or entirely by a plug-in battery?

To try and get our arms around this question of “When?”, I’ve created an EV adoption framework and acronym that I’m calling “CARMA.” While some variables will prove to be more crucial than others, EV adoption is going to require at least five key factors to come together to reach the magic level of mass adoption. 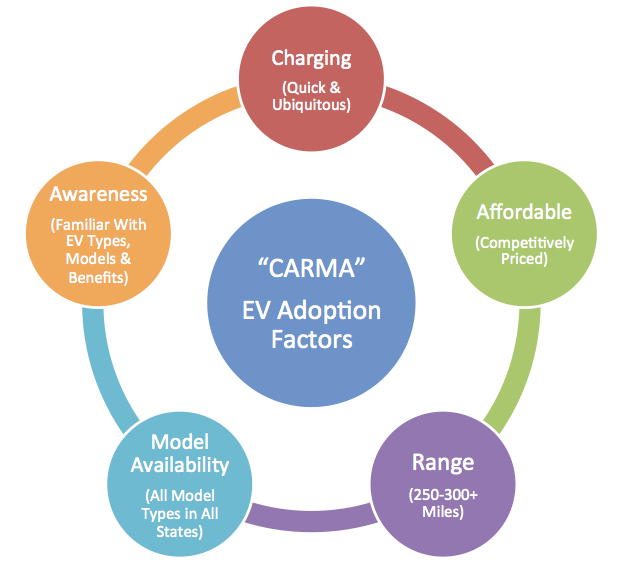 Following is an overview of the framework and meaning behind the letters of the “CARMA” acronym:

C = Charging Speed and Availability: As of January 2, 2017 there are 15,098 EV charging stations and 32,290 outlets in the U.S., according to the Alternative Data Fuels Center. By contrast, there are eight times more gas stations, at more than 121,446. And while this “refueling station” gap is closing rapidly, it ignores a few key differences between gas and electricity refueling needs.

One of the key selling points of EVs is the ability to charge your car inexpensively at home, including during the middle of the night when electricity rates are lower. When parked in your garage, the time to recharge your car is of little consideration as long as it is fully-charged in the morning.

But millions of Americans will likely want to install specialized EV chargers in their garages to enable more convenient and quicker charging than plugging into the nearest 110V or 220V outlet with an extension cord. According to analysis by the Rocky Mountain Institute, the average total cost for a home Level 2 charging set up (equipment plus electrician costs) is around $1,200.

With 70 million single-family detached homes in the U.S., home charger installation will be a significant opportunity for electricians and EV charger equipment suppliers, but a cost hurdle for many households.

Charging an EV when traveling on road trips of several hundred miles is of course more akin to filling up at a gas station – except for the time factor. Putting 15-20 gallons of fuel in your car’s gas tank takes about 5 minutes, whereas even a Tesla Supercharger will take about 20 minutes to add just 50% of battery range to your Tesla EV.

Tesla has nearly 350 Supercharger stations across the U.S., with many of them along major interstate corridors between major cities. And according to the Alternative Data Fuels Center, there are 5,192 DC Quick Charging stations. This is a good start, but thousands more quick chargers are needed across the U.S. to help reduce range anxiety.

As average EV battery range increases to around 200 miles in the next few years, the most critical need for charging infrastructure will include:

The growth of chargers at workplaces and retail locations will play a role in reducing range concerns, especially for renters lacking convenient charging access at “home.” But as “home charging” becomes the norm with longer-range EVs, quick charging and destination chargers will be the most critical enablers of mass adoption of EVs.

A = Affordability: EVs and PHEVs are currently too expensive, with many electric or plug-in hybrids costing $10,000-$20,000 more than their non-plug-in sister or comparable models from the same manufacturer. There are a few exceptions, including the Nissan Leaf and Fiat 500e in states with significant incentives and the Tesla Model S and X which are similarly priced to other high-end luxury-performance models.

The key factor driving affordability in the next 5 years will be the cost of batteries, which are estimated to be the single largest cost in the manufacturing of EVs. Several experts predict that battery prices will decline 50% or more by 2022, which will put many EV models at cost parity to their comparable internal combustion engine (ICE) models. As demand for EVs rises, overall production costs will also decline from increased scale in the manufacturing process.

Low gasoline prices in the U.S.also continue to make EVs less competitive with ICE models. According to the study “Fuel Prices and Auto Sales” by the Fuels Institute, however, American consumers pay close attention to the retail price of fuels, but what’s more influential on auto purchase decisions is the “balance between necessary vehicle utility and fuel economy.”

This suggests, however, that demand for BEVs and PHEVs could grow significantly with a combination of high gas prices (e.g., above $4 per gallon) and auto manufacturers offering the American consumer high-utility vehicles (SUVs of all sizes, crossovers, mid-/full-sized cars and pickup trucks).

R = Range: Out of approximately a dozen pure BEVs on the market in the United States, only 3 have a range of more than 200 miles – the Tesla Model S and X (208-315 miles) and the just launched (but only in select markets) Chevrolet Bolt (238 miles). The Tesla Models S and X, however, are only within reach of perhaps 5% of American households and the Chevrolet Bolt is a small city car that is only attractive to another minor segment of the U.S. population.

Most pure BEVs, such as the Nissan Leaf, Fiat 500e and Ford Focus Electric, currently average plus or minus 100 miles of range. On the positive side, range-extended PHEVs, such as the Chevrolet Volt, can often travel more than 400 miles, though having electric-only ranges of about 50 miles.

This lack of acceptable range is the biggest shortfall of current EVs today. A National Renewable Energy Laboratory (NREL) survey of consumers conducted in February 2015 revealed that 56% of Americans won’t consider buying an EV unless it has at least 300 miles of range.

In the next 5 years, many EVs will likely be able to charge to a range of 150-200 miles in about 10-15 minutes, potentially reducing the “acceptable” total range to 200-250 miles for many consumers.

Then with typical battery ranges of 200-300 miles, charging times of 10-15 minutes for 150-200 miles of range, EVs will become significantly more attractive to the typical American car buyer by 2022.

M = Model Availability: As of January 2017 there are 28 PHEV and BEVs on the market in the United States out of more than 300 car models. That is a small fraction of available car models, but more significantly, EV availability varies from zero or only a few models in several states to all models in the compliance-car state of California.

But perhaps most significantly, there are still popular auto categories that have either zero or a just a few available models of BEVs or PHEVs, such as pickup trucks, small and large SUVs, mini-vans and crossovers. Through November of 2016, these “light-duty trucks” categories comprised 59% of U.S. auto sales. Mid-sized and large cars comprised another 18.5% of sales to date in 2016, yet only a few plug-in cars are available, such as the Ford Fusion Energi.

Until BEVs and PHEVs are available, at least in the United States, in the types of car and light truck models that are popular and in high demand (77.5% of sales currently), EVs will not gain mass adoption.

1) It will be interesting to see if the push toward autonomous cars by ride sharing, technology and major auto companies has any impact on the supply of electric cars.

2) In an earlier incarnation of this “CARMA” framework I had a second “R” to convey the role of regulations, especially Federal and state incentives. However, their impact on future sales should be negligible as the Federal tax credit and many of the state incentives expire or will be reduced in the next few years.

A = Awareness: Along with model availability comes actual awareness and understanding of EVs and PHEVs. While in some Northern California communities, for example, there is literally a Tesla on every block, in many parts of the US, consumers have never seen a Tesla and couldn’t tell you want the acronym “EV” stands for.

According to the previously mentioned NREL survey, 43% of respondents said they’ve never been in or near a plug-in electric vehicle and 52% could not name a single model. In a more recent survey from Altman Vilandrie & Company, 60 percent of American drivers said they were unaware about electric cars and 80 percent have never ridden in or driven one. 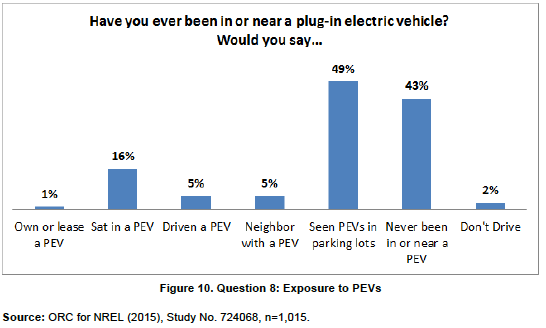 Beyond this lack of awareness and familiarity of electric vehicles, many Americans simply don’t have an understanding of the differences – and advantages and disadvantages – between hybrids, plug-in hybrids (PHEVs) and pure battery EVs (BEVs). To move beyond EV enthusiasts and early adopters, the auto industry must do a better job of educating the average consumer on the various types of available electric cars and the corresponding models.

Education and awareness are clearly key to EV adoption, and a renewed effort by industry participants could potentially double the amount of EV sales in the U.S. But the lack of supply of affordable, long-range, quick-charging SUVs, crossovers, pickup trucks and mid/large family sedans – is what is actually keeping EV sales to less than 1% in the U.S.

So when will the U.S. “cross the chasm” into the “Early Majority” with EVs accounting for 16% of new car sales? I’ll conduct a detailed analysis in a future post, but a back of the napkin forecast suggests that we’ll reach this milestone in about 2024.

In future posts I will delve deeper into the above factors in an attempt to try and estimate the timing of EVs “crossing the chasm” into mass adoption and provide some prescriptions that could speed up adoption. I’ll be leveraging both primary and secondary research, behavioral economics concepts and will always attempt to apply rigorous analysis of existing data.