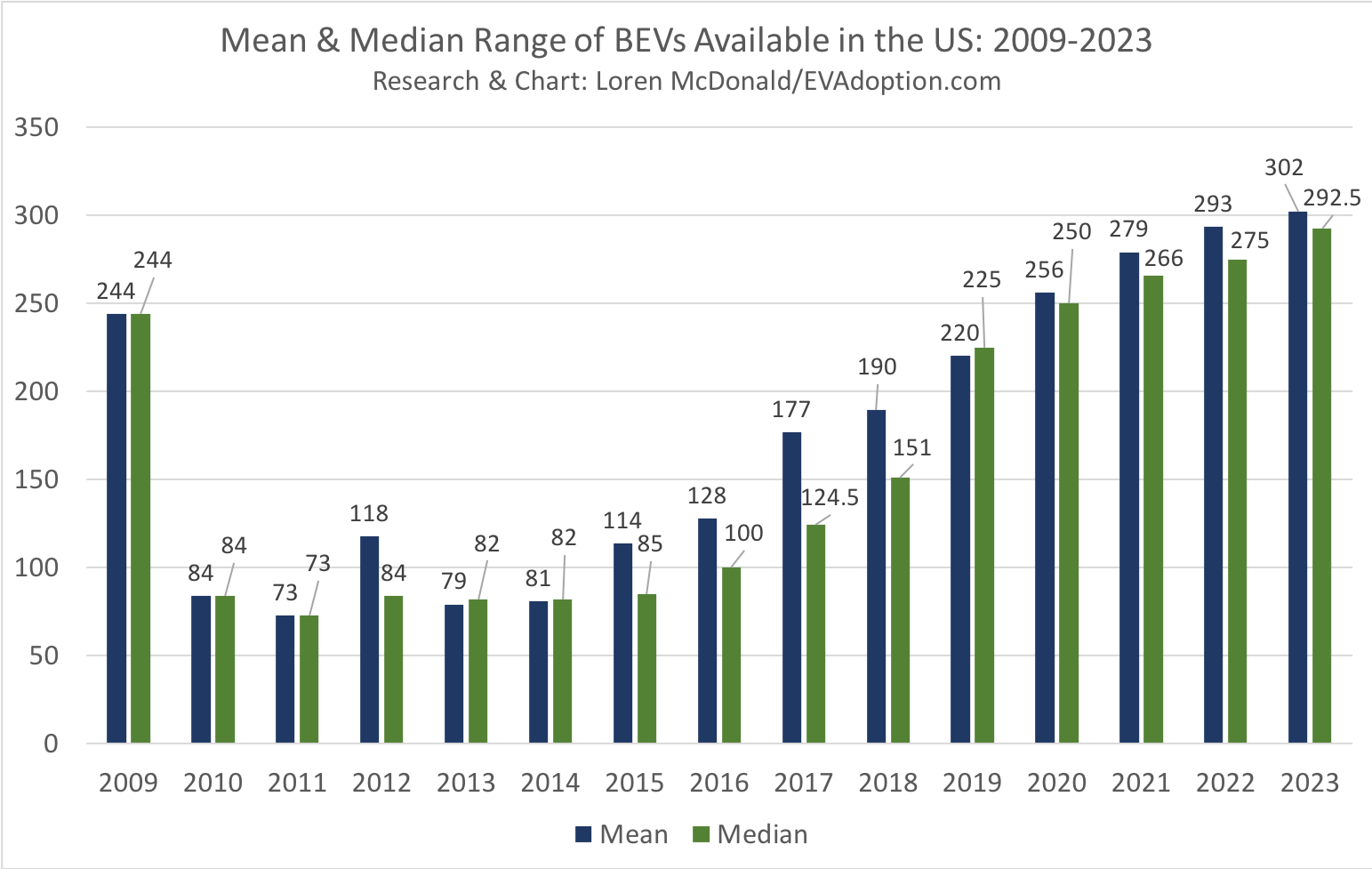 With the overall average range of electric vehicles available in the US headed toward 300 miles in the next few years, range as the key hurdle to adoption is being surpassed by concerns about charging speed and infrastructure.

By the end of 2020, 19 BEV models (including model variations) should be available in the US with at least 200 miles of range, and 12 (although 8 of them being Tesla Models and variations) will have 250 or more miles of range using the EPA testing standard. With Tesla Model Y production beginning to scale and 300-mile range electric crossovers including the Ford Mustang Mach-E, Volkswagen ID.4, and Nissan Ariya arriving in the next few years, American consumers will for the first time have a decent choice of 250+ mile range EVs.

While the higher range of Tesla models inflate the overall average, which will be 254 miles by the end of 2020 (assuming the Ford Mustang Mach-E reaches dealers by December), even without Tesla models, the average and median range for US available EVs will be 217 and 228 miles respectively.

Between 2010 and 2016, battery electric vehicles (BEVs) available in the US averaged well under 150 miles of EPA range, with only models from Tesla surpassing 200 miles. These included the Nissan LEAF, BMW i3, Fiat 500e, Ford Focus Electric, Kia Soul EV, and Volkswagen e-Golf. Some of these BEVs had less than 100 miles of range, but could be purchased with low-cost leases and worked fine as commuter or errand cars.

But with most American consumers expecting 300 miles of range, under 150 miles was a joke to an average buyer. (Note: While an outlier, a former coworker of mine recently shared that their sole car for the family of five for three years was an early Nissan LEAF with only 84 miles of range and it served them just fine.)

Tesla changed the image of electric vehicles with its Model S and then Model X being fast, powerful and with lots of range. The Model S Long Range Plus in fact has now reached 402 miles. (Note: Today, August 10, Lucid Motors announced that their Air luxury sedan achieved 512 miles in a private test using the EPA testing standard.) While generally expensive, Tesla made electric vehicles aspirational for many. And combined with their extensive Supercharger DC fast charging and Level 2 Destination Charging networks, long road trips – the key hurdle for EVs – became not only possible, but convenient and enjoyable.

In addition to most new EV models now having at least 200 miles of range, many of the existing BEVs have had significant range increases over the course of a few years. Granted, these increases are often (but not always) due to the use of larger battery packs, but the price of the BEVs often stays about the same or in the case of Tesla is reduced.

With a majority of BEVs now or soon having between 225 and 300 (or more) miles of range, almost every BEV will satisfy the the typical daily needs of a majority of Americans. Yes, there will be a sizable number of US households that live in cold winter regions or who frequently take long road trips that will prefer 300-400 mile EVs, but these households should not be the near-term market focus for BEVs.

As I wrote in my recent article, Multi-Vehicle Households in the US: A Huge Opportunity For Lower-Range EVs, there are likely easily 25 million US households with a combination of 2 or more vehicles, convenient access to charging, and the economic means to afford a new BEV. These households can easily get by with a 200-250 mile range BEV and use a second car if preferred for mid- and long-range road trips. For this market and use case, access to public charging may not be critical, unless the EV is used as a primary vehicle or driven on road tips.

But in general, as BEVs increasingly have 250-300 (or more) miles of range, then drivers’ key concerns and considerations switches to charging variables rather than simply maximum range.

The average range of gas or diesel vehicles in the US is about 412 miles, although range can be well under 300 miles for smaller cars to more than 500 for trucks and hybrids. For a majority of US consumers – regardless of the gas or diesel vehicle purchased – they knew they could go 300 to 400 miles on road trip without needing to stop. And there was always confidence that when needed, they could stop off at the gas station and fill the tank up again in about 5 to 7 minutes.

But because of the time it takes to charge, potential EV buyers can’t think about range without factoring in the availability, reliability and speed of charging stations.

This in my opinion has been the fundamental reason behind Tesla’s success – the combination of 300 miles of range plus the wide availability of Supercharger locations, the number of connections at each location (which now averages more than 9 per location), and perhaps most importantly the speed of charging. And Tesla keeps increasing both the charge rate that their EVs can accept and the capabilities of the Superchargers. The V3 Superchargers can charge Model 3s and Model Ys at a rate of up to 250 kWs, which in the real world might equate to adding ~250 miles in around 30 minutes, as opposed to the theoretical 1,000 miles in 60 minutes.

In part 2 of this series, I will share why charging concerns are now the key hurdle to EV adoption.

5 Months of Chevrolet Bolt Sales: What Do The Numbers Tell Us So Far?