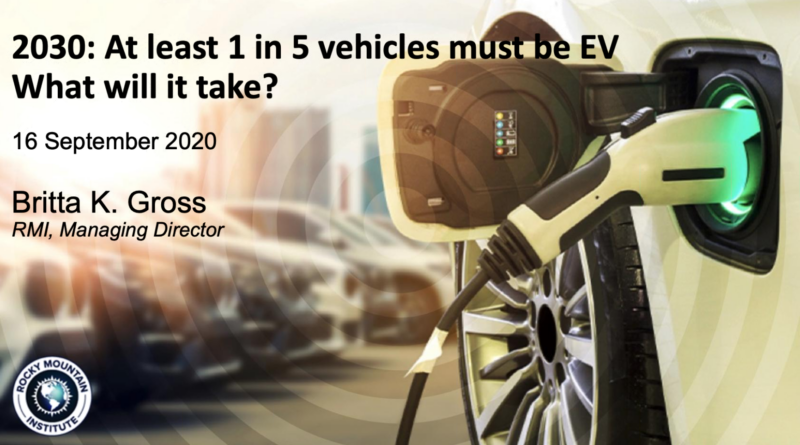 The short answer is no – not without significant regulations such as major emissions penalties or an outright ban of vehicles powered by the internal combustion engine.

I recently watched an excellent webinar, Consumers and the Battery Electric Vehicle (BEV), hosted by the Center for Automotive Research with great individual presentations from Mike Dovorany of Escalent and Britta Gross of the Rocky Mountain Institute (RMI).

One thing that really stood out for me was Mary’s opening salvo that in order to achieve climate goal targets, the US would need to reach 50 million (or about 1/5) of vehicles in operation being electric by 2030. I found the genesis of this forecast in a December 2019 Rocky Mountain Institute blog by Britta, 1 in 5 Cars Need to Be Electric by 2030: What Will it Take?

According to the RMI blog post, “… that even if the electric grid were on a path to achieve 75–85 percent of clean energy production by 2040, 15–20 percent of global light-duty vehicles would need to be electrified by 2030 in order to limit global temperature rise to less than 2°C and avoid the most catastrophic effects of climate change (and ensure that our cities are cleaner and more livable for billions of people around the world).”

The transportation sector accounts for 28% of US greenhouse gas emissions with light-duty (passenger) vehicles comprising 59% of the transportation emissions. Medium- and heavy-duty vehicles account for 29%, according to the EPA.

Also according to the EPA, the number of vehicle miles traveled (VMT) by light-duty motor vehicles (passenger cars and light-duty trucks) increased by 46.1 percent from 1990 to 2018, as a result of a confluence of factors including population growth, economic growth, urban sprawl, and periods of low fuel prices. During the webinar, Britta Gross said that in addition to needing 50 million vehicles to be electric by 2030, the US needed to reduce VMT by 30%.

Having recently done some simple forecasts of my own, I wanted to dive into the RMI numbers and also assess how likely it is that we can achieve the RMI target. First, by my conservative scenario forecast, there will be a total of approximately 317.3 million vehicles in operation (VIO) by the end of 2030. Applying RMI’s 15%-20% target of total vehicles in operation that would need to be electrified to my VIO forecast and I arrive at from 47.6 to 63.4 million. (50 million VIO applied to my 317.3 forecast would equate to 15.8%.)

I then wanted to see what it would take to reach 50 million (or close to it) EVs in operation by the end of 2030. I started with a forecast of reaching 1.7 million EVs in operation by the end of 2020 and then applied a rather arbitrary but realistic YOY growth rate for 2021 of 42%. I then applied a variety of increases in growth rate each year through 2030, but ended up using an annual increase of 1.5% on top of the 42% YOY increase in 2021. This resulted in reaching approximately 48 million electric VIOs, which is at the lower end of the 15% RMI minimum requirement. (This is or course a rather simple model, but it is intended just to show the level of sales growth needed to reach the RMI target.)

In the above chart I show the comparison of EV sales as a percent of new vehicle sales (blue line) and the YOY growth rate of EV sales (green line) it would take to reach nearly 50 million (48 million) EV sales by the end of 2030.

So back to the original question I posed in the title of this blog. Reaching 50 million electric vehicles in operation by the end of 2030 is not technically impossible, but it is very unlikely without government regulations that would force the automakers to transition their fleets to at or near 100% electric this decade.

Deloitte, the global consulting firm, projects that the US will reach 27% EV sales share of new vehicle sales by 2030. That is well short of the 99% in my forecast of what it would take to reach 50 million electric vehicles in operation. And assuming new vehicle sales of 16.5 million in 2030, Deloitte’s 27% forecast equates to 4.5 million in EV sales that year.

And JP Morgan compared forecasts for total electric vehicles in operation globally from several organizations and saw a wide range of from 2% to 20%.

Let’s look at some other forecasts from a few other organizations:

None of the above forecasts achieve EV sales and VIO anywhere close to what RMI says is needed. I will be updating my EVAdoption 2030 forecast in the coming weeks, but my current conservative forecast puts total electric vehicles in operation at about 14.1 million vehicles and 4.5% of total.

Popular sentiment is that mass adoption of electric vehicles in the US requires EVs to reach cost parity with ICE vehicles, have more than 300 miles of range, and charge to 80% in about 30 minutes. And those are indeed huge consumer hurdles, but the even bigger challenge and more immediate impediment to adoption is a lack of adequate supply of EVs.

For example, in the US there are 14 auto brands that yet to offer even a single EV (PHEV or BEV) for sale. And Tesla accounts for more than 50% of all EV sales meaning that the legacy automakers have yet to offer compelling EVs in any significant volume and variety. (See our table of number of EVs by brand.) Until the US has regulations that force automakers to get serious about EVs, consumers will remain on the sidelines for many more years until they actually have real choice and options when considering an electric vehicle.

Other challenges and hurdles include:

Europe and China focus: Bringing EVs to the US market is simply not a priority for most automakers who are focused on the markets in Europe and China due to EU and China government mandates and greater consumer interest. The net result is many EVs will either never be brought to the US, they are introduced 1-2 years later, or due to supply chain issues are only available in small volumes.

Model lifecycle: The time it takes to bring a new car to market from concept to finished product is shortening – often from around 5 years to 3-4. But the net result is that new EVs being developed today, may not be available in the US (also see above) until 2024 or 2025.

Battery supply: Supply of batteries is one of the biggest hurdles to EV sales as almost every automaker at different times has limited availability of their EVs due to a shortage of batteries. Toyota is one of the latest automakers blaming supply chain issues for delays on bringing the RAV4 Prime to the US.

Used cars: Each year Americans purchase about 2.3 times as many used vehicles as new ones and with the average vehicle price continuing to climb, more and more consumers may opt for much cheaper used ICE vehicles than new EVs.

Model  variety: In the US, one of every six new vehicles purchased each year is a pickup truck – and yet not single electric truck is yet available, though several are on the way in the next 2 years. And while sedans have declined in popularity, the four models of Honda Civic (#6) and Accord (#16) and Toyota Corolla (#11) and Camry (#17) remain extremely popular and account for 6.5 percent of US vehicle sales. There currently aren’t any EV sedan models the could logically be considered direct competitors to those four models, though the Tesla Model 3 is attracting some historical buyers of these sedans. The key point however is that there until electric models are available that provide a clear and wide choice for buyers of similar ice vehicles, EV sales will not reach their potential.

Cost: EVs generally still cost from $5,000 to $10,000 or more versus comparable ICE vehicles, thought Federal and state incentives can often reduce those differences to zero. And when you include lower “fuel” and operating costs, many EVs have a lower total cost of ownership (TCO) (see recent Consumer Reports study). But the challenge is that most consumers don’t yet think in terms of TCO and may not factor in incentives when comparing EVs to ICE vehicles. Must education remains.

Apartment complexes: Roughly 40 percent of Americans live in some type of multifamily property or other housing type that is without easy access to home charging. Apartment owners have been reluctant to invest in EV charging infrastructure for several reasons, including that they, A) Don’t believe they should be in the re-fueling business; B) Level 2 charging infrastructure often requires additional electrical upgrades and can be fairly expensive to install; C), They view EVs as still very early in the adoption curve and most are not yet losing tenants if not offering EV charging; and D) They just don’t see an ROI yet and have much higher priority areas that require maintenance and investment. (Note I’m working with a company that has a potential game changing level one solution for apartment owners – stay tuned as I will share more information on this in the coming months.)

Beyond government mandates to motivate US households to purchase electric vehicles, there are several other approaches that are key to reduce transportation-related carbon emissions and air pollution. In a follow-on article I will outline several of those.