After 8 months or two-thirds of 2017, it is pretty clear that GM’s Chevrolet Bolt is finally hitting its sales stride in the US.

The “Big 6” EVs – Tesla Model S and X, Chevrolet Bolt and Volt, Toyota Prius Prime and Nissan LEAF – continue outpacing all other battery electric vehicles (BEVs) and plug-in hybrid electric vehicles (PHEVs) that are available in the US, at least until Tesla’s Model 3 starts reaching customers at scale later this year.

Note: Tesla does not report monthly sales figures so it is difficult to accurately assess near-term sales trends for the model S and X. As such, the following trend analysis is focused primarily on the four non-Tesla EVs.

Before analyzing the above sales trends, it is important to understand the potential impact of current auto market forces and the upcoming availability of new or updated EVs. These include:

1. Shift to crossovers and SUVs: Cars are down 11.3% YTD (Jan-Aug) compared to 2016, while sales of crossovers are up 7.0% and SUVs/crossovers combined are up 5.3%. Among the “Big 6” EVs only the Model X is a crossover, while the Bolt hatchback is considered a crossover in some camps. This shift in consumer preferences is an extra challenge for the Prius Prime, Volt, Model S and LEAF.

2. Overall decline in car sales in the US: Sales of cars and light trucks in the US are down 2.7% through August compared to the same period in 2016. A decline in overall auto sales means fewer people will also be in the market for an EV, but it may also mean that many who do buy a new vehicle may opt for a lower cost ICE vehicle instead of choosing an EV.

3. Rollout of the Tesla Model 3: Many EV buyers are actively monitoring the production progress of the Model 3. Delays could lead to buyers opting for a different EV because they don’t want to wait for the Model 3. Or if Tesla is able to scale up production say in October – giving reservation holders hope – alternate EV buyers may pass on a LEAF, Bolt, Volt or Prius Prime.

4. Release of the updated Nissan LEAF: Details remain sketchy on the second generation LEAF, but it is expected to have a more traditional design and two battery options with one having as much as 200 miles of range, among other changes. On September 5, Nissan will reveal the updated 2018 LEAF and if consumers like what they see, it could shift some Prius Prime and Bolt sales to the lower priced LEAF when it becomes available in November or December.

With the above factors in mind, I’ve analyzed sales of the “Big 6” EVs and identified 5 key trends:

Trend 1: Chevrolet Bolt is the new EV sales leader: For the months of July and August, Chevrolet has sold an average of roughly 300 more Bolts than Toyota’s Prius Prime, about 550 more than sister PHEV Chevrolet Volt and 800 more units than Nissan’s LEAF.

For several months, Bolt supporters have explained that the Bolt’s sales were lower than hoped because it wasn’t available in many states and supplies were limited with only a few units in inventory at some dealerships. 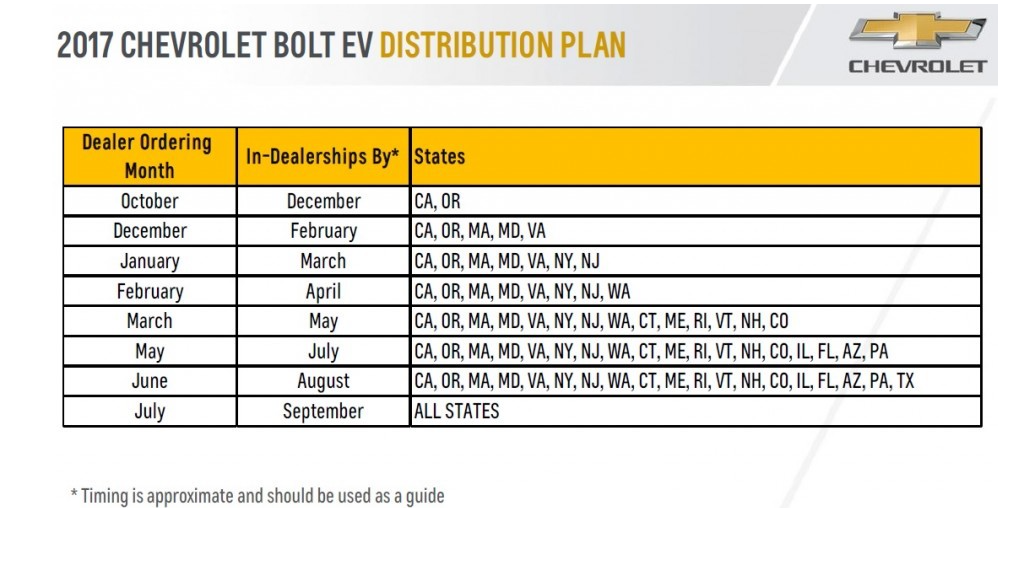 However, with GM seeing strong demand for the well-received BEV, they sped up to August the national roll out to all 50 states. But while availability in about 30 more states certainly helped with moving more Bolt’s off the lot, these late-stage states account for a small percentage of EV sales and so are not likely to move the needle much going forward. 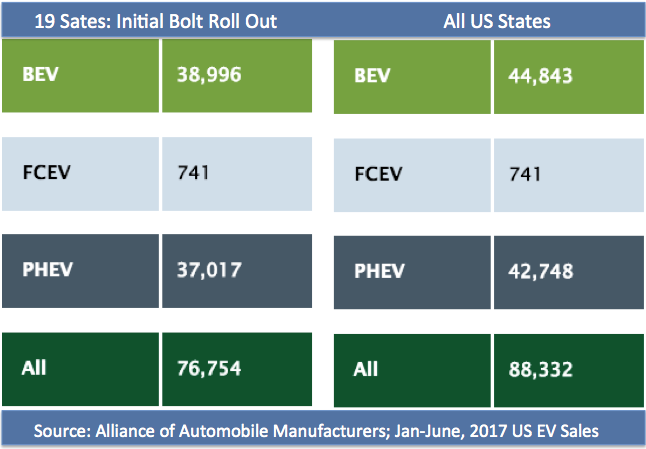 YTD EV sales in the 19 initial states where the Bolt was available accounted for 87% of total US EV sales, using the Alliance of Automobile Manufacturers ZEV Sales Dashboard. Bolt sales increased 7% from July to August, which could simply be attributed to the BEV now being available in these additional 31 states.

In the next few months, the Bolt should climb to roughly 2,500 units a month as all Chevrolet dealers in the US will complete their Bolt training, should receive adequate inventory and both local and regional marketing programs start kicking in.

A check of inventory on Cars.com on September 1 shows 5,053 Bolts available at dealers nationwide. California, however, comprises 50% of all new EV sales in the US, so the

key is moving sales on the West Coast. A check of inventory at Dublin Chevrolet in Dublin CA, one of the largest Chevrolet dealerships in the high EV adoption area of Northern California, and you’ll find 95 Bolt’s listed.

Trend 2: Chevrolet Volt Sales Have Likely Peaked: August sales of 1,400 Volts are roughly 700 less than the 2,120 peak level in March. The Volt’s trailing two months of sales for July and August drop the popular PHEV down to 5th place, only above the also declining sales of the LEAF.

Looking at the chart below also brings to light, that while sales of the LEAF are also declining, the Volt is the only top-selling EV that had lower sales in August than in January. With consumers becoming more comfortable with pure BEVs, the Volt’s market is likely shifting to a niche of green buyers who also need or want the ability to take frequent or regular trips of longer than 300 miles.

Trend 3: The bloom is off the LEAF sales: The number one selling EV in the US in 2014, the LEAF dropped to fifth place in 2016 and has been firmly entrenched in the sixth spot once the Bolt became available. Sales would likely be even lower for the LEAF without many Nissan dealers offering aggressive lease rates.

With only 107 miles of range, the current LEAF is simply no longer competitive. What keeps the LEAF among the “Big Six” for now is its reputation, “green signaling,” low cost and discounts, especially as the second generation version approaches.

While the Volt (53 miles) has a pure electric range that is roughly double that of the Prime (25 miles), the base Volt is $6,100 more than the base Prius Prime. That price difference combined with the great reliability and green perception of the Prius brand gives it a nod over the Volt among many buyers.

With a subtle shift toward BEVs over PHEVs (see following trend), many future potential Prius Prime buyers might decide to go with a Bolt, Model 3, updated LEAF or Hyundai Ioniq.

Trend 5: Increasing Shift to BEVs over PHEVs: With the launch of the Model 3, an updated LEAF and now national availability of the Bolt – BEVs should dominate monthly sales by year end. The one exception could be the Prius Prime. But at least at among the top selling 6 vehicles, 5 of the 6 will be BEVs once the Model 3 production scales up.

Key Questions for the Rest of 2017

Anecdotally it is known that many Model S and X owners “over purchased” – meaning they spent more than they wanted to, but did so because they wanted all of the features and benefits that come with owning a Tesla. With the coming availability of the much lower-priced Model 3, could Model S and X sales decline significantly?

I expect Model S and X sales to remain close to current/recent levels for several reasons:

2. How will Model 3 availability impact sales of the Bolt, Volt and LEAF? It remains unclear if Tesla can start delivering a significant number of Model 3s by year end. But if the company can deliver at least 3,000 Model 3s in one of the remaining months, it would likely be the top selling EV for that month.

But that is to be expected and that level would be a huge disappointment as Elon Musk has stated the company hopes to produce 20,000 per month by the end of the year. However, if Tesla can deliver say 5,000 or more Model 3s in November, it would send a strong signal to potential EV buyers that future deliveries could be close to on target and then could have two conflicting effects:

3. How will the September 5 reveal of the 2018 updated LEAF impact sales of the current LEAF, Bolt, Volt and Prius Prime?: If the 2018 LEAF offers an option with about 150 miles of range at a competitive price, it could freeze some price conscious Bolt, Volt and Prius Prime buyers who may wait to buy an EV until the LEAF arrives in the US in November or December. Until the new LEAF arrives, however, the 2017 model could see an uptick in sales as dealers offer sweetheart lease deals to move out inventory.

If Nissan also offers a version in the 200-mile range neighborhood, it could take away some Bolt sales from buyers who simply prefer a Japanese-branded car over a Chevrolet. The new LEAF could also steal some Model 3 reservation holders who simply don’t want to wait as long as a year for their reservation spot to become available.

What do you think? Is there anything else we’ve learned about EV sales trends so far in 2017?