Trucker Interview Goes Off the Rails: Slams Tesla Semi Because of Politics

We’ve reached a sad state in society today where virtually anything – from the food you eat, where you buy it and type of car you drive – has become politicized.

Electric vehicles, and especially Tesla and Elon Musk have been no exception. Electric vehicles (EVs) and Tesla are often attacked as being toys for the rich that are built using taxpayer money. And detractors like to say that the electricity grid in the US is still mostly sourced from coal power plants and the grid won’t be able to handle the electricity needs of a growing number of EVs.

Some of the negatives around EVs are of course true, including: few available and affordable models are yet on the market, inadequate range of most current models, long charging times and a shortage of charging infrastructure in some markets. But anyone who is following the transition to EVs knows that all of these shortcomings are rapidly being addressed and should fade away by 2025, or earlier.

On Thursday night, November 16, Tesla and Elon Musk revealed a prototype of their semi truck. While the Tesla Semi is at least few years away from production, most industry observers were impressed with the announced performance specifications of the truck.

But then enter truck driver Matthew Garnett, who was interviewed Friday, November 17 on Fox Business by reporter Elizabeth MacDonald. Mr. Garnett, a frequent guest on Fox News and a contributor to The Federalist blog, is quite outspoken on his views, especially about the role of the US government. 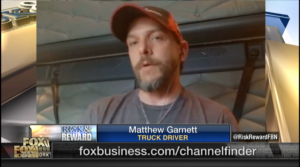 MacDonald, an accomplished journalist, seemed to forget all of the skills she learned during her career as an investigative reporter. After a fairly straightforward set up reporting the Tesla Semi announcement and the current stock price, MacDonald immediately fired up her anti-Tesla bias with the opening salvo to Garnett of:

“… OK, blow this story out of the water. Does it stack up, this Tesla electric truck?”

Watch the Fox Business interview below.

Let’s take a look at some of Garnett’s and MacDonald’s rants in this interview:

1. Garnett: “First, Musk is motivated by his environmental agenda. And as long as that is the case, I don’t trust him.” OK, Garnett, you don’t like Elon Musk because he cares about the planet. That’s fine. But can we talk about whether the Semi is a good truck or not?

2. Garnett: “Give me an outfit like Cummins or Peterbilt or somebody that would come out with a truck like this and I might trust it. But coming from this guy, no way.” OK, you clearly don’t like change or anything new. And you especially don’t like Musk. I guess you are implying that a real truck driver wouldn’t be seen in an electric Tesla Semi – but if Cummins offered one, well that would be OK. 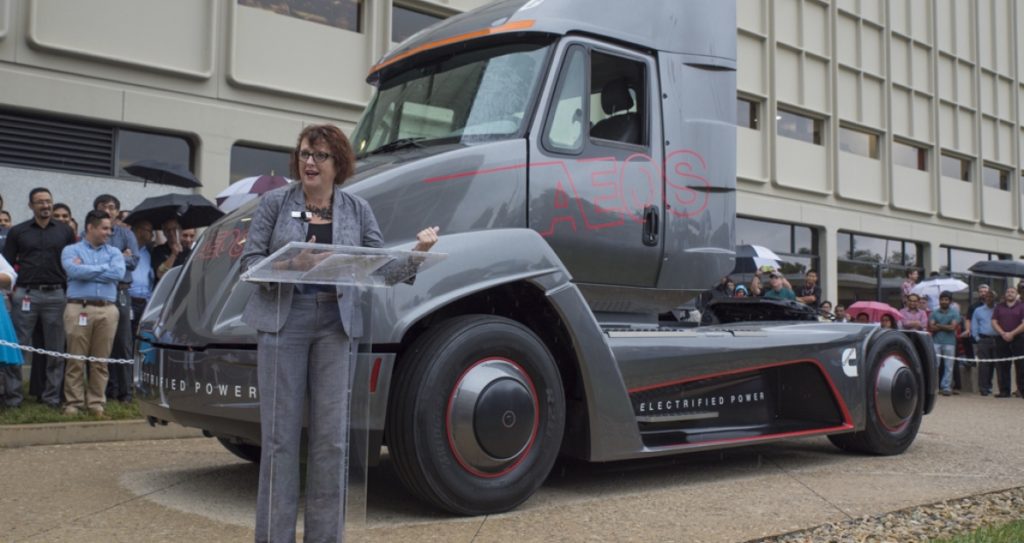 So what you are actually saying Matthew is that the idea of an electric truck actually doesn’t bother you – if it has the necessary performance and is made by a company you like and trust. Good news Garnett, Cummins has announced plans for an electric Class 7 truck. And while not a semi truck, Peterbilt announced plans to build an electric refuse truck back in May. OK, someday you will get your wish, but in the meantime, didn’t you like ANYTHING about the Tesla Semi? 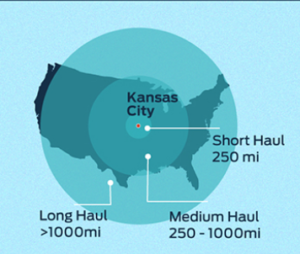 3. Garnett: “I don’t fuel up every day, I fuel every few days. If I had to fuel every day that would waste all kinds of time. So maybe that little bit of savings I’m getting in fuel efficiency is going to be wasted on all that time I’m spending on charging the batteries back up. 500 miles is nothing for a truck.”

Garnett is partially correct that 500 miles is “nothing for a truck.” But again he clearly didn’t pay attention to Tesla’s target market and strategy for the Semi, which is NOT long-haul trips.

The Tesla Semi was announced to have a range of 500 miles and take 30 minutes to reach a full charge. Garnett compared those numbers to his current truck which has a 1,500 mile range and takes 10 minutes to refuel. 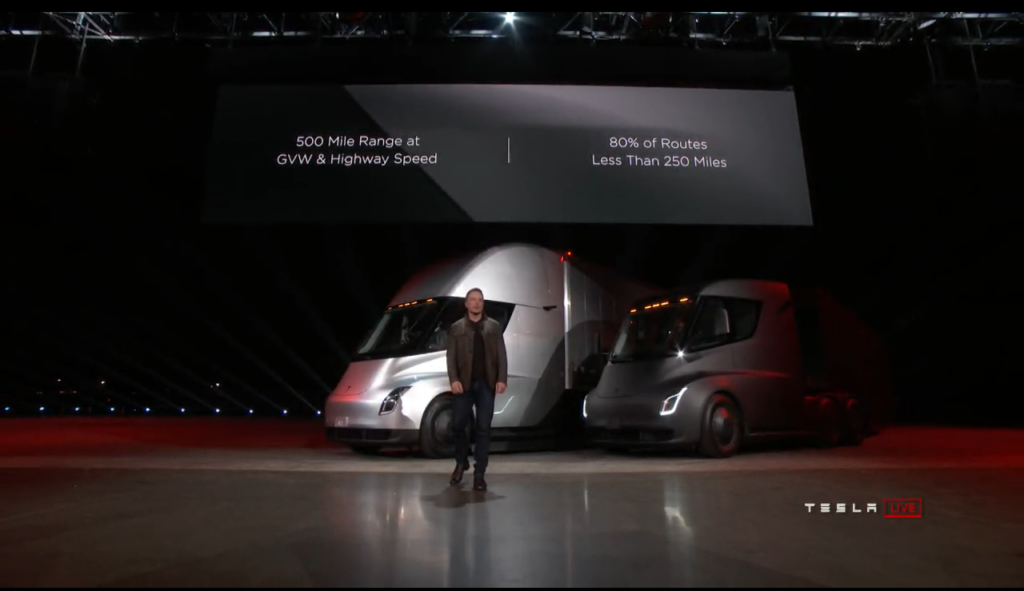 All fine so far, the Tesla Semi clearly can’t match the range and refueling time of a diesel truck. But Garnett conveniently left out three key points in his argument:

4. MacDonald then goes on a rant about the US power grid, suggesting that it is “rickety” and “we don’t know if it can handle charging so many electric cars and trucks.” In this area, MacDonald is partially correct – the US power grid needs upgrading. However, with the explosive growth in solar and wind energy, battery storage and microgrids and grid management techniques to minimize EV charging during peak energy demand, most experts agree that the grid will be able to handle the growth in EVs.

5. In response, Garnett then goes off on a rant about the government not being able to maintain our roads or repeal Obamacare. “No way, this (EV charging infrastructure) is just not going to happen.” This is an interesting comment from Garnett, someone who thinks the government should stay out of most things, because we are better off leaving the solutions to private enterprise. And in this case, the majority of the EV charging infrastructure that will be available at for-profit truck stops is likely to be funded primarily by utilities, truck manufacturers, charging companies, oil companies, and truck stop and restaurant operators. This seems to be an intentional miss and rant from Garnett, who doesn’t understand how EV charging infrastructure is being, and will be built out.

6. Then MacDonald adds: “Tesla exists off of government subsidies.” This is a common refrain from conservatives and Tesla haters. Tesla does indeed take advantage of EV tax credits the same as all auto manufacturers who sell electric vehicles in the US. To date in fact, GM has sold more EVs than Tesla, but you never hear anyone slamming GM on this point. Their counter is that GM, Ford and others sell lots of non EVs, therefore the benefit they receive is relatively tiny. This may be true, but the tax credit is available equally to all manufacturers.

Secondly, Tesla was the first automaker to repay its loan under the Energy Department’s Advanced Technology Vehicle Manufacturing program.

An article in the Los Angeles Times, “Elon Musk’s growing empire is fueled by $4.9 billion in government subsidies,” details many of the tax breaks and incentives that Tesla, SolarCity and SpaceX have received from Federal, state and local governments. While the article correctly points out that all companies have access to these tax incentives, what it fails to make clear is the nature of the businesses that Tesla, SolarCity and SpaceX are in.

Do these companies benefit greatly from various government incentives? Of course they do. But the companies are being built to change the world and reinvent industries. These are start-up companies that are creating and building new technologies and products. By that very nature they benefit from government programs that are in line with those goals. Fault your elected officials if you have a problem with various tax incentives, not people or companies who take advantage of them, as they should.

To suggest that Elon Musk specifically targeted industries that benefited from government incentives is disingenuous as he was not the founder of either Tesla or SolarCity. SpaceX was founded by Musk, but quoting the Los Angeles Times article, “… depends far more on government contracts than subsidies, …”

MacDonald’s saying that “Tesla exists off of government subsidies” clearly showed her anti-Tesla bias, was just a repeat of the political right’s disdain of Tesla and an attempt to further incite Garnett’s negative views toward the US government and Tesla. This may be entertaining television to some, but it simply isn’t good reporting.

7. MacDonald then sets up Garnett for another rant by teeing up one of his anti environmental talking points. Garnett then responds: “This is what happens when new products from flawed global warming theory is put out there in the marketplace.” Garnett suggests that Elon Musk is only motivated by his “environmental agenda, not by making truck driving easier, not by making the trucking industry more profitable. None of that is what’s motivating him primarily. And so as long as that is his agenda, then the product (Tesla Semi) is going to suffer.”

This is mostly and obviously wrong. Yes, Tesla’s publicly stated mission “is to accelerate the world’s transition to sustainable energy.” But there is no mention of global warming or climate change or any political bias. The company’s goal is simply to help the world achieve greater energy sustainability. That goal in fact is fundamentally consistent with conservative beliefs. The rub is on how you get there.

But Garnett is simply wrong in his comments and clearly did not watch the unveiling of the Tesla Semi or pay attention to any of the goals for the truck, which include:

All of the above goals and features of the Tesla Semi are in fact designed to achieve what Garnett says the Semi does not stand for: “…making truck driving easier” and “making the trucking industry more profitable.” On this point, Garnett gets an “F” for failing to pay attention and for simply ignoring the Semi’s specifications.

8. Finally, if you are still with me on this, Garnett goes completely off the rails and doesn’t answer MacDonald’s question about whether the Tesla Semi will have lower operating costs than a diesel truck. Garnett, starting at the 3:10 point in the interview, comes unhinged saying that “this whole environmental agenda is a strike against capitalism.” After more rambling about capitalism he closes with: “What brings people joy and freedom and prosperity is trucks. And if you start monkeying around with that then that is what you are monkeying around with at the end of the day.”

MacDonald wraps up the interview thanking Garnett saying” We love common sense talk from Matthew Garner.” Oops, she even got his name wrong after all of that. Maybe she wasn’t listening to him either?

This segment was simply an embarrassment to journalism and media interviewing. Rather than bringing a guest on such as an executive from one of the major trucking companies who could have shared what they like, don’t like and what is still “wait and see and prove it to me” about the Tesla Semi, Fox Business chose a trucker with a known political agenda and who ignored all the facts related to the Tesla Semi.

As a new organization it is their duty to not just be a shill for a company like Tesla, but that also means having journalistic integrity and good reporting and interview skills. The news director at Fox Business should be thoroughly embarrassed by this interview.