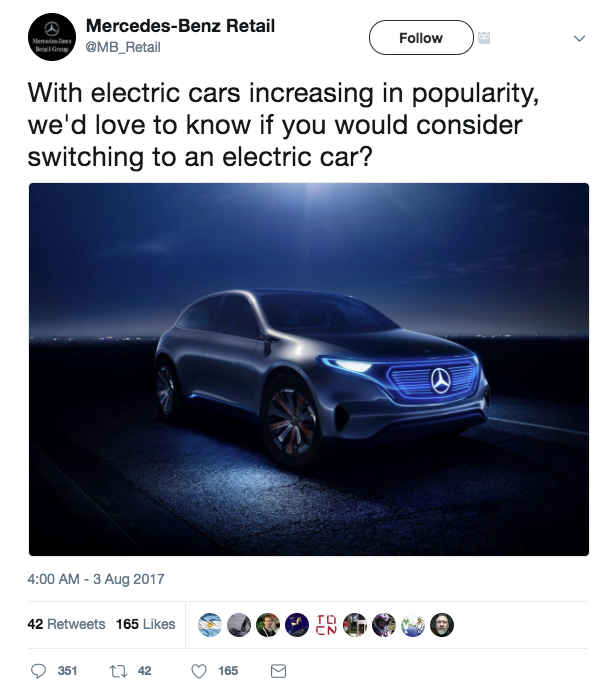 The Mercedes-Benz social media person or team asked a simple question – “Would you consider switching to an electric car?” – likely in hopes of generating some online engagement with followers and perhaps a little informal research.

The conversation started off OK, but not great with some serious back and forth Tweets between a Patrick Razavet and the Mercedes social media person: 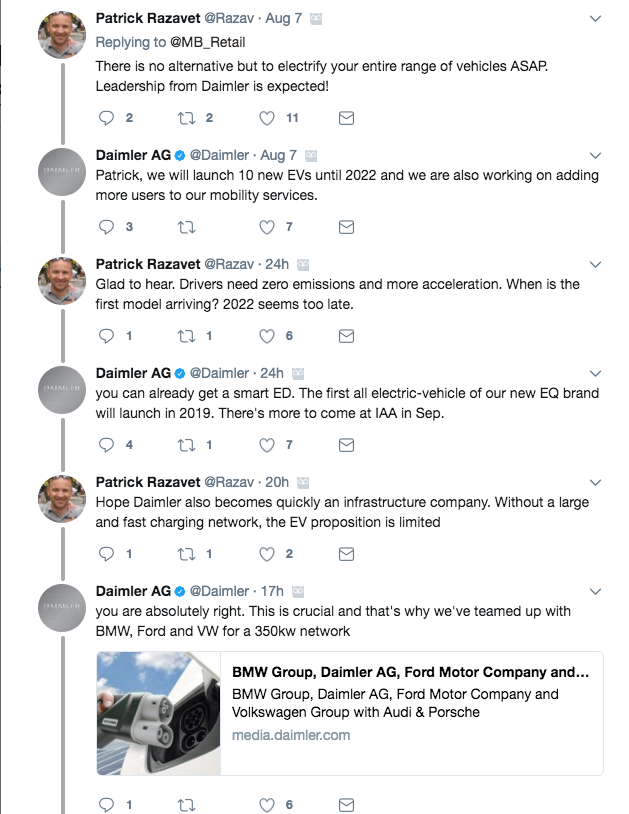 Some tough Tweets but good, standard corporate responses – in essence, we got this electric car thing in hand. We’ve got 10 EVs coming now through 2022 and we are investing in fast charging.

But then it seemed to go south pretty quickly.

Word spread about the Mercedes Twitter post and I know it was shared on at least one Tesla Facebook group that currently has 46,600 members, and likely in other forums as well. Electric car owners, and especially Tesla owners, are often very passionate about their views that automakers need to quickly transition to battery electric drive trains and move off of gas and diesel engines.

By their very nature of being early adopters, current EV owners have less patience for automakers that are lagging in their transition to battery electrification. And so hundreds of people – roughly 350 as of this writing – let Mercedes know how they felt about that simple question of: “Would you consider switching to an electric car?”

While the Tweets varied widely in their exact wording, the vast majority conveyed something close to this: “We already did and we replaced our Mercedes with a Tesla and we are never going ICE again.” (ICE meaning internal combustion engine.)

Following are a sampling of several of the Tweets: 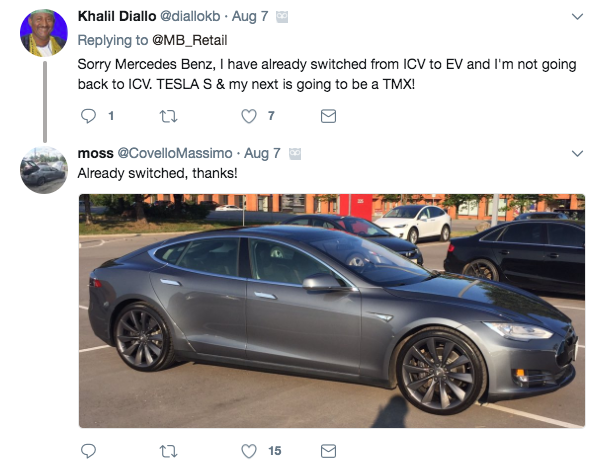 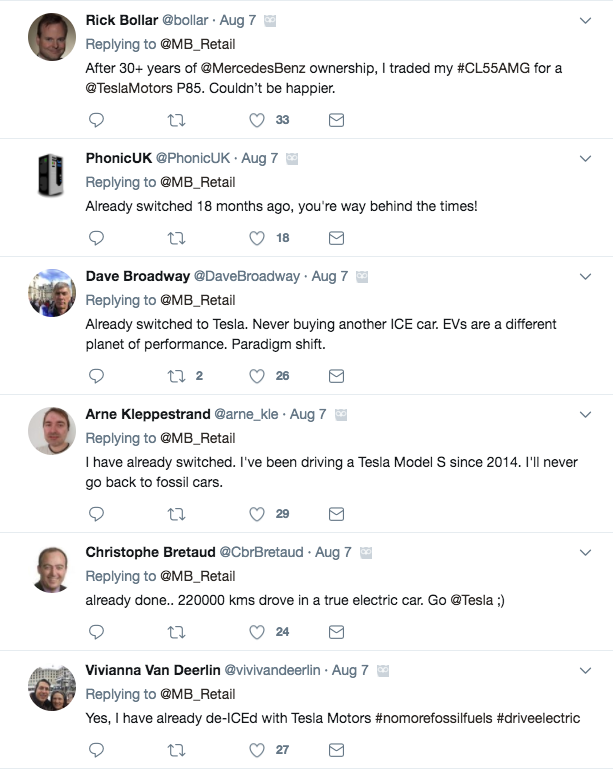 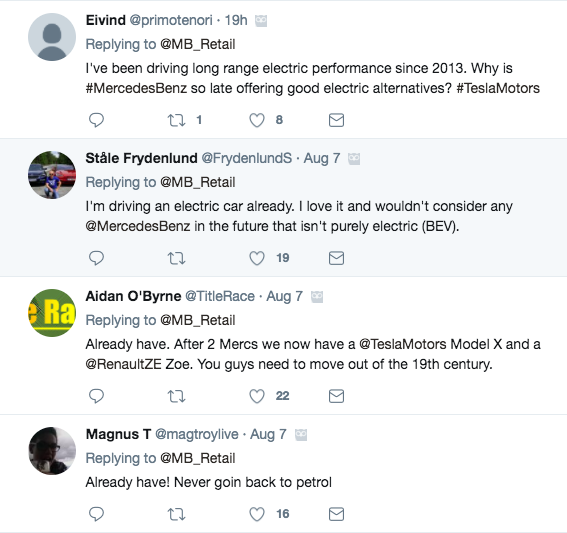 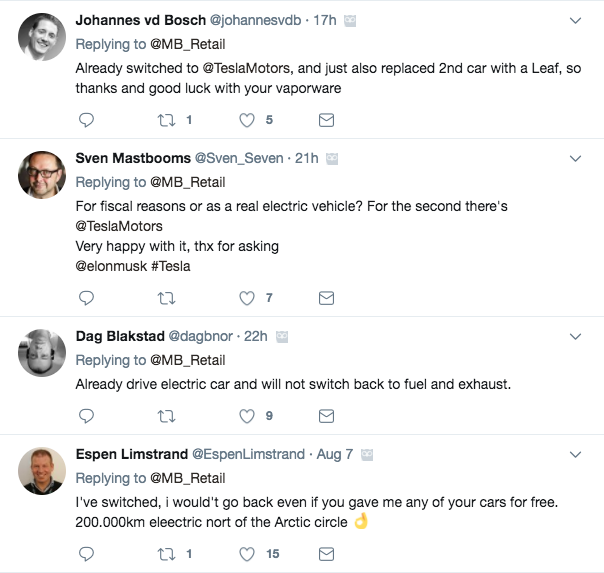 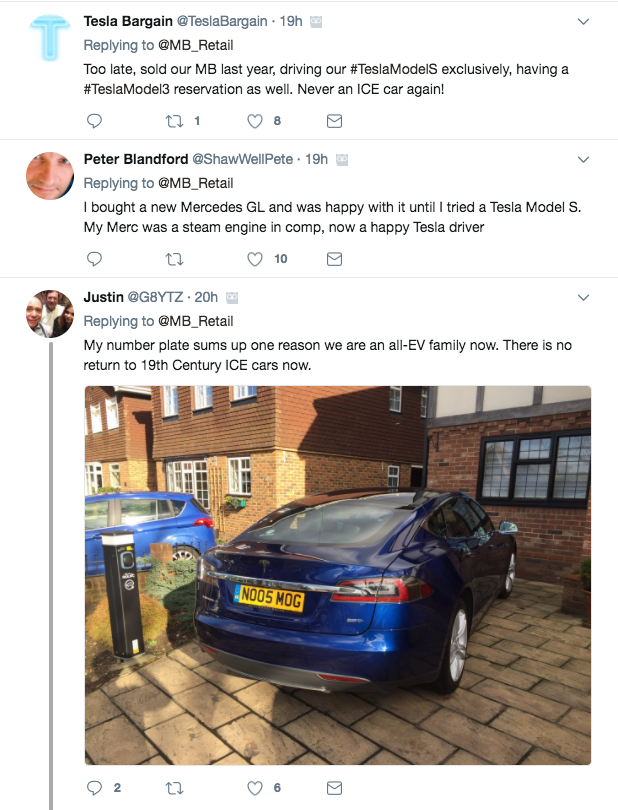 Predicting how people will respond on social media is never easy. If you try to create something to go viral – it usually doesn’t happen. By its very nature, a lot of successful social media campaigns go viral for organic, and unanticipated reasons.

By the same token, when people have a negative reaction toward something, it can often spin out of control because of their desire to punish a brand for a lack in judgement.

In the case of Mercedes-Benz, they didn’t offend any particular race, gender, ethnicity, age group or other demographic. But what they did do is unintentionally set themselves up as a target of the more than 2 million people worldwide who already own an electric vehicle.

To this group, the simple question of: “Would you consider switching to an electric car?” – was indeed offensive.

It offended them and sprung many to respond because at its core the question Mercedes-Benz asked reflected what’s viewed by EV owners and advocates as the hubris of legacy automakers – many of whom will go kicking and screaming before they will get serious about electric vehicles.

In fairness to Mercedes-Benz, they are one of a handful of legacy automakers that actually seems to fully understand the dramatic changes occurring in the auto industry – including autonomous technology, electrification, mobility solutions and the intersection with battery storage for residential and commercial applications. And if they deliver on the promise of launching 10 new EVs between now and 2022, they will be one of the clear leaders in the transition to electric drive trains among automakers.

But if they truly believed in a future of electric cars, deep in their essence, culture and soul and as employees of a great automaker – would they have had to ask the question?: “Would you consider switching to an electric car?”

That was their simple mistake. They asked the wrong question.

Their competitor Tesla has never asked if people would buy an electric car. Rather, Tesla asks: “Do you want to buy a car that will help change the world and is also one of the coolest cars you will ever drive in your life?”

While Mercedes-Benz may have just been schooled a little in social media, the real lesson here for executives of all of the automakers, is not to ask consumers: “Will you buy an electric car?,” but rather “Will you buy our electric cars?”