After 5 months in 2017, electric vehicles (EVs) are now averaging a hair more than 1% of total auto sales. Hooray!

While nearly every article in the general and business press includes a line about electric vehicles in the US “comprising less than 1 percent of auto sales,” perhaps EVs will now consistently and be above that mark.

When we look at EV sales in the top US states for all of 2016, however, it comes as no surprise that a handful of states are doing most of the heavy lifting. 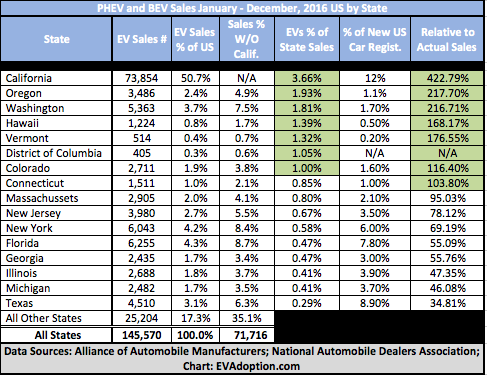 Six states and the District of Columbia saw EV sales comprise 1% or more of total auto sales within their state. At 3.66% for the year, California had nearly double the next highest EV purchase rates held by Oregon and Washington.

Seven states also matched or exceeded their percentage of US auto sales with their percentage of US EV sales. California consumers purchased 12% of autos in the US, but bought more than 50% of all EVs in the US. In essence Californian’s are pulling 4 times their EV purchase weight. While Oregon and Washington buys at a bit more than 2 times their total auto purchase rate.

Looking at the first 3 months of 2017 for California, however, and we see significant growth in pure battery electric (BEV) sales, with a jump to 2.7%. This is a bit of a monumental milestone as BEVs have now crossed over from the Innovator stage (0-2.5%) and into the Early Adopter (2.5%-16%) phase of technology adoption.

When including non-plug-in hybrids sales are still below where they were in 2013-2014 when hybrid sales exceeded 6% in California. Since peak hybrid sales in 2013, green-car sales have gradually started shifting over to PHEVs and BEVs.

While the shift to plug-in vehicles is obviously viewed by most as a positive trend, it would appear that a lot of the growth in PHEV/BEV sales is coming from previous hybrid owners (or those who were considering a hybrid).

This would make sense as California auto buyers are still more than 10 percentage points from crossing the chasm in mass adoption and the Early Majority phase of technology adoption.