Sales of electric vehicles in the US have tended to be a fairly equal mishmash of BEV‘s versus PHEV‘s with neither powertrain dominating the sales charts – until deliveries of the Tesla Model 3 started to scale in Q2 of 2018. 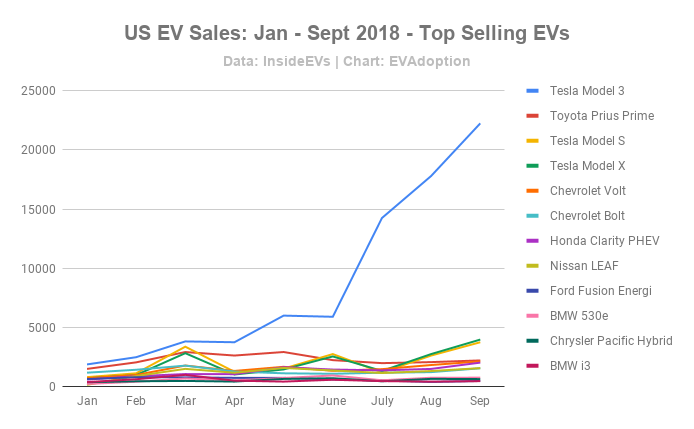 In January 2018 the mix of BEV versus PHEV sales was split at almost exactly 50% to 50%. As of September the shift to BEVs had increased significantly to 76% versus 24% PHEVs because of the huge volume of Tesla Model 3 deliveries.

A key sub-trend, however is understanding the mix of BEV versus PHEV sales of models that offer both powertrain options. In the US there are currently two EVs with both options: the Hyundai IONIQ and the Honda Clarity.

In the chart below I’ve compared sales of the BEV and PHEV versions for the IONIQ and Clarity from January through September 2018. At first glance it suggests that US consumers have a significant preference for the plug-in hybrid versions, versus BEVs. But it isn’t quite that simple because in both cases the BEV versions are sorely lacking in range and not very competitive with other BEVs or their sister PHEVs.

Sales of the Hyundai IONIQ PHEV and Honda Clarity PHEV through September 2018 were 4.8 and 12.9 times higher respectively than their BEV powertrain counterparts. 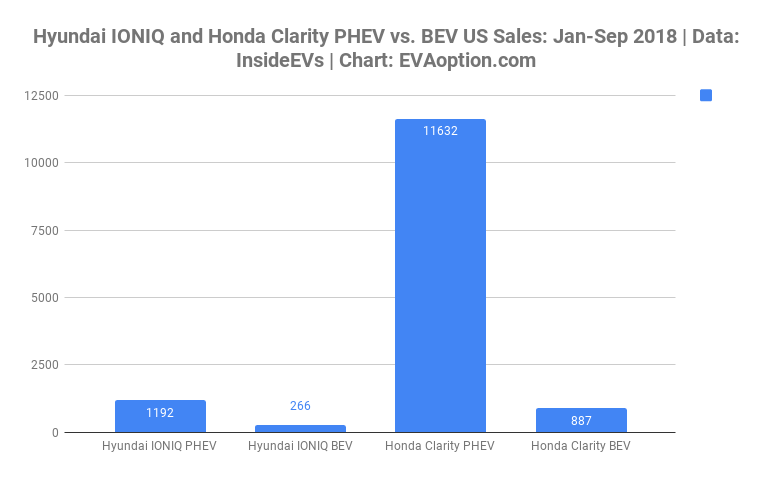 Additionally both models are only available in selected states so it’s hard to draw a conclusion on how this would apply across all US buyers. Outside of the East and West coast my assumption, however, is the PHEV version would be preferred even more.

For these two models, PHEVs offer significantly longer range and yet still offer federal, state, and utility incentives as well as access to HOV lanes. The BEV variants simply don’t offer greater value or any significant benefits over the PHEV versions.

The Honda Clarity’s 47 miles of electric range is second only to Chevrolet Volt’s 53 miles and is more than half the 89 miles of electric range for the Clarity BEV. Think about that. The PHEV version has 53% of the range of the all electric version, which is almost an embarrassment. In some respects it’s surprising that almost anyone would opt for the clarity BEV as the PHEV version seems to be the better choice for most consumers.

Add in the 340 total miles of range and reasonable MSRP of $33,400 and it isn’t surprising that the Clarity PHEV is now the 7th best selling EV in the US. And at some point in 2019, likely beginning in July when the Federal EV tax credit is reduced in half for GM EVs, the Clarity PHEV could surpass both the Bolt and Volt in sales.

Implications And Recommendations for Automakers

There are a few lessons to be learned from the Clarity/IONIQ sales analysis along with our analysis of multi-powertrain options from earlier this year, including:

Multi-powertrains Are Likely Confusing To Buyers: While several automakers seem to believe that offering alternative powertrains is a positive and consumer centric, in most cases it means the model has multiple types of competitors and lacks a very defined positioning in the marketplace. In the absence of clarity, consumers tend to choose the simple option – a competing offering that owns a clear position in their mind.

225 Miles of Range is the New Minimum for BEVs: The Chevrolet Bolt, Tesla Model 3, and soon to be available Hyundai Kona BEV, Kia Niro BEV,  Jaguar I-PACE, and Nissan LEAF optional battery pack all have/will have ranges of at or more than 225 miles. Granted the price ranges vary widely, but American consumers are starting to expect that any new BEV should have at least 200-250 miles of range – or that it isn’t competitive.

The exception is and can be BEVs with around or less than 150 miles of range and very attractive lease rates such as the Fiat 500e, which historically did well in California. But any newly launched BEVs with under 200 miles of range and especially if the model is also available in PHEV version with a decent electric range, is going to struggle to find a market.

Competitive Positioning and Pricing is Critical: To date, Hyundai and Kia’s EV challenge in the US is that their buyer demographics are primarily consumers seeking significant value in their cars. This is in contrast to buyers of luxury cars and some of the Japanese brands where consumers are more willing to pay a premium for their vehicles.

This can be seen if you compare combined sales of the Kia Niro (regular hybrid) version to that of the Kia Niro PHEV. Between January and September 2018, US sales of the PHEV Niro ranged from a low of 5.1% to a high of 12.8% of the total combined Niro and Niro PHEV sales. This averages out to 9.6% per month. In essence when faced with a choice of the two versions, only 1 in 10 buyers are opting for the more expensive PHEV version. 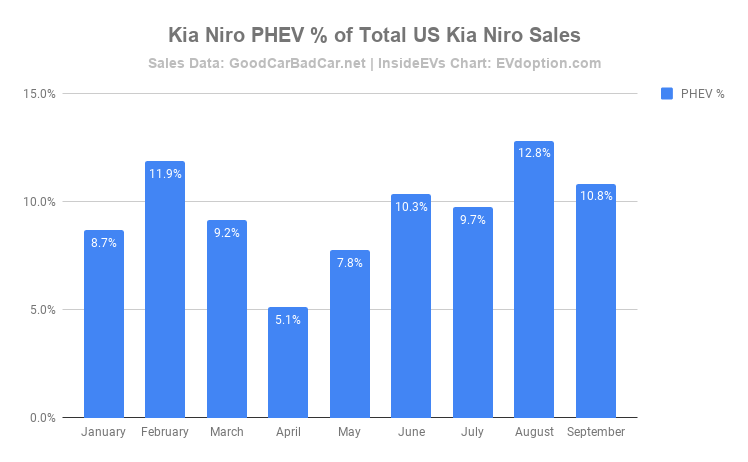 The base Kia Niro hybrid MSRP of $23,340 is $4,710 less than than the Kia Niro plug-in hybrid, which has an MSRP of $28,200. The cost difference of nearly $5,000 is just too high for most Kia buyers and therefore most will and have opted for the regular hybrid version rather than the PHEV version. 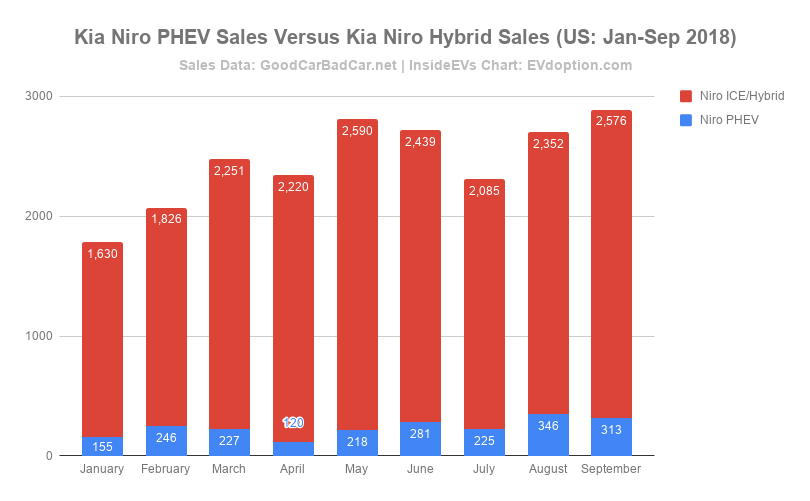 If you factor in the $4,543 Federal EV tax credit, various state and utility rebates and credits the PHEV version could have a net lower cost than the Niro hybrid. But price-conscious Kia buyers are likely more concerned with their actual walk-off-the-lot cost than the eventual cost down the road after tax credits and rebates are received.

With nearly 260 miles of range the Niro BEV will have one of the best combinations of price and range of any EV in the world and should result in solid demand in the US and attract some non-traditional Kia buyers. If Kia can price the Niro BEV within a few thousand dollars of the plug-in hybrid version it stands a chance of matching or beating the PHEV version’s sales volume. If it is priced too high, it may struggle to find a significant market of buyers.

Time to End Production of the Honda Clarity BEV

Honda should stop selling the BEV version of the Clarity and focus their efforts on scaling production and availability of the PHEV version. With only 89 miles of range, the BEV version has the least amount of range of any BEV available in the US, other than the smart fortwo. Honda never should have brought this vehicle to market and so it is time for Honda to admit their mistake and to pull the plug.

The company should, however, bring a BEV version of the Honda HR-V or new from the ground up crossover similar to the CR-V or HR-V to market with about 250 miles of range to compete with the Kona and Niro BEVs.

With nearly double the electric range of the Toyota Prius Prime PHEV (25 miles) and with only 6 fewer miles of range less than the Chevrolet Volt, Honda should instead make a significant push on the PHEV version. This would reduce buyer confusion and solidify marketing and dealer initiatives and investments behind the PHEV version.

In 2019 or 2020, Honda should increase the range of the Clarity PHEV to 55-60 miles and aggressively target prospective buyers of the Prius Prime and Volt with superior range and competitive pricing. Honda seems to have a winner on their hands with the Clarity PHEV, but in fact may be holding it back from further success by continuing to offer and support two (if you also include the fuel cell version) weak sister versions. 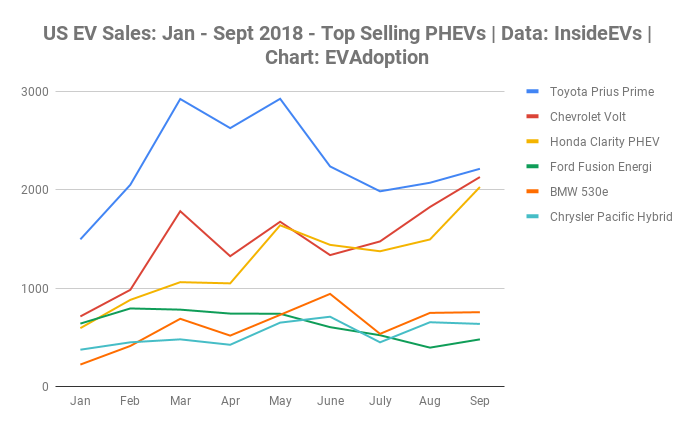 Hyundai should also probably put the IONIQ BEV to pasture or at least focus distribution and sales in large dense US cities and position it with its high battery efficiency, sedan styling and 124 miles of range as more of a “city car.” While the IONIQ has a lot of fans, partially because of its high battery pack efficiency, it simply isn’t selling well in the US.

With the coming launch of the Hyundai Kona BEV and outstanding 258 miles of EPA range, the company should just focus on making the Kona electric as successful as possible. This would allow Hyundai to better position the IONIQ PHEV against the Prius Prime, Volt and Clarity PHEVs.

While the major automakers dabble in EVs, many of them seem to have forgotten the basic tenants of product positioning. While offering multiple powertrains of the same model seems to be customer centric, the reality is with EVs still costing significantly more than their ICE or hybrid sisters, EVs simply lose out when buyers make the comparisons.